The Thiruvattaru Temple with a 22-foot-long Adikesava Perumal idol, built in the Travancore style of architecture, will be consecrated on July 6

The Thiruvattaru Temple with a 22-foot-long Adikesava Perumal idol, built in the Travancore style of architecture, will be consecrated on July 6

Seeing the sea-colored god, my father, lying on the serpent’s bed, melts my body,

What shall I do, O people of the world?

Thondaradipodi Azhwar couldn’t control his emotions after seeing the lord of Srirangam.

He would probably have been at a loss for words had he seen Adikesava Perumal, the deity of Thiruvattaru in Kanniyakumari district. The majestic 22-foot-long idol is the longest reclining deity among those of the 108 Vaishnavite shrines and is capable of leaving worshipers in awe. As the temple is being prepared for the kumbabishekam on July 6, after a 400-year hiatus, extensive conservation work has been carried out. It is not only the deity in the sanctum sanctorum, but the whole temple wears a new look.

“This was undertaken at a cost of ₹7 crore. The Department of Hindu Religious and Charitable Endowments allocated Rs. 4 crores and the rest came from donors. Although it was decided in 2009 to perform the kumbabishekam, it took 13 years to complete the work,” said PK Sekarbabu, HR&CE Minister. What makes Adikesava Perumal unique is that the idol is made of Kadusarkarai. It was created by covering 16,008 salagramas with lebanam, a paste made up of over 60 ingredients and herbs. It is called Kadusarkarai Yogam. The renovated idol of the sanctum sanctorum is magnificent. It looks like it was carved out of the finest block of granite, never giving the slightest hint that it is made from herbal paste. Abishekams are not performed for Kadusarkarai Yogam deities. In the past, 16,008 handfuls of rice were regularly cooked as an offering to the 16,000 salagramams inside the idol.

According to Perumal, “The Thiruvattaru temple covers 3.27 acres and is 90 meters above sea level. The temple finds reference in Sangam’s work, ‘Purananuru’. Mangudi Marudanar, one poets in the collection, call it ‘valaneer vattarttu’ It was a challenge to find skilled craftsmen with knowledge of traditional architecture, to restore the beautiful woodcarvings and murals on the walls of the temple. Murals on the walls of the temple. | Photo credit: special arrangement

The Ottraikal Mandapam (made of a single rock) in front of the sancturm sanctorum and the Namaskara Mandapam are fine examples of the unique design elements of the temple. The replica of Adikesava, carved on the door of the temple, has been completely restored with all the smallest details. 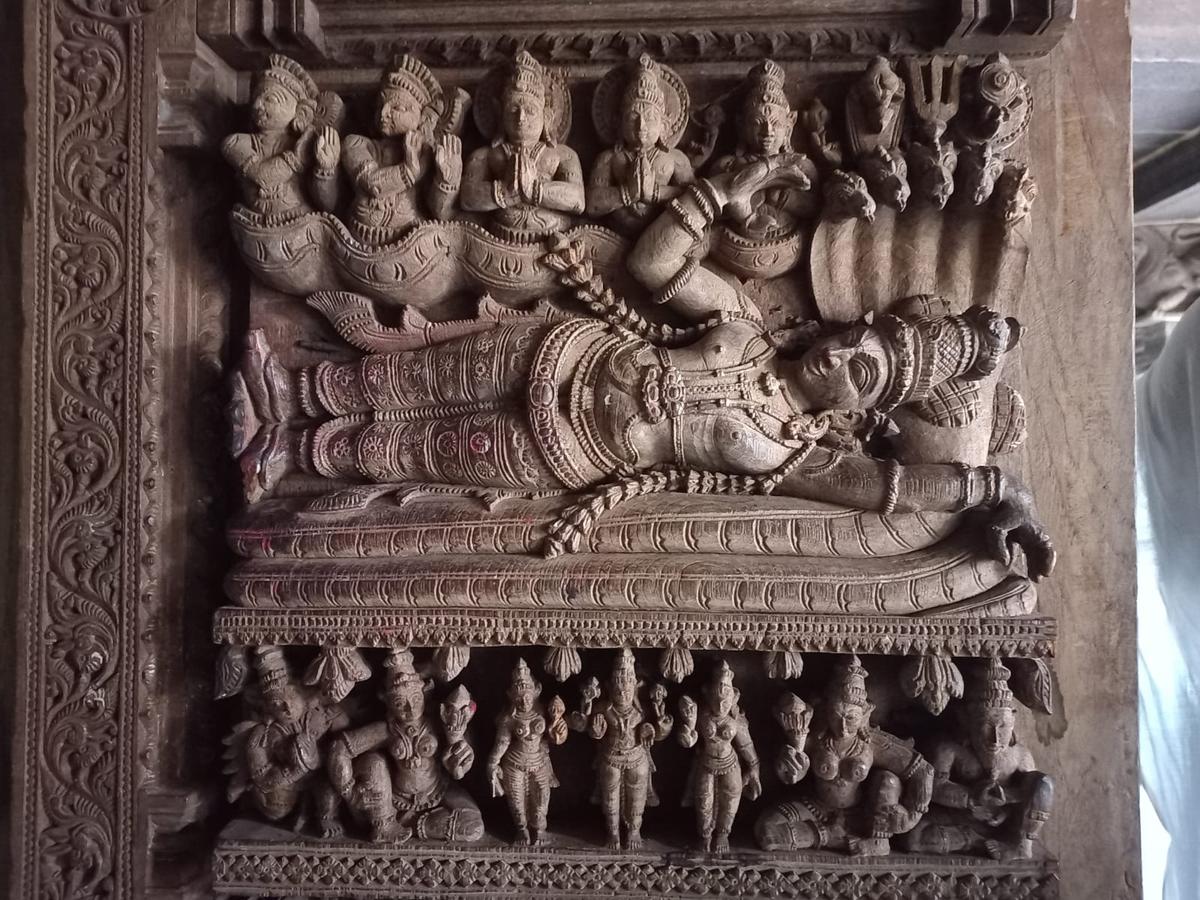 The replica of Adikesava engraved on the door of the temple. | Photo credit: special arrangement

Salient element of the perumal temple of Adikesava


Another important feature of the temple are the murals on the walls. In fact, a controversy over the restoration of these murals has delayed the date setting of the kumbabishekan. HR&CE Commissioner J. Kumarakurubaran then called on KU Krishnakumar, Principal and Chief Instructor, Guruvayur Devaswom Institute of Mural Paintings to complete the job. A new dwajasthambam was also erected.

“The 20-meter-long teak pole belonged to the 1952 plantation. It was soaked in oil mixed with 32 types of grass for two years. The wood has a gold-plated coating,” said a senior HR&CE department official overseeing the work at Thiruvattaru. One of the sculptures representing Krishna seen on the temple door. | Photo credit: special arrangement

The kumbabishekam is expected to highlight the grandeur of the temple praised by the Vaishnavite saint Nammazhwar in 11 hymns.

AK Perumal added that Chaitanya Mahaprabhu, the 15th century saint, visited Thiruvattaru where he could get a copy of Brahmasamhita without any distortion. “He had stayed for a month and had written comments sitting in the mandapam in front of the sanctum sanctorum.”

In modern times, a short story, “Thirumugappil”, by Jayamohan, summarizes the spiritual experience of devotees. He tells it based on Alvin Isaac Kallicharran, the West Indies cricketing legend, visiting the temple.

“He stands there looking confused and lost. He is speechless. When the nambi (priest) comes out, he places a hundred rupee note and starts walking without saying a word,” writes Jayamohan, describing Kallicharran’s experience.

Lord Shiva Temple at 10 Janpath Photo: IENS New Delhi: Amid talk of Congress adopting a ‘Hindutva-friendly’ approach to countering the resurgence of the Bharatiya Janata Party (BJP), the party’s top ex-workers offered prayers at a temple of the Lord on Monday Shiva at 10 Janpath, the official residence of party chair Sonia Gandhi. Photos […]

With prompt diagnosis and the right treatment, people living with HIV can live long, healthy lives. In recent years, however, survival gains among people living with HIV have revealed a new concern – an increased incidence of early cardiovascular disease associated with long-term HIV. Why cardiovascular disease is likely to develop a decade earlier in […]

Daijiworld Multimedia Network – Udupi (HB) Udupi. April 11 : Chief Minister Basavaraj Bommai on Monday April 11 announced a grant of Rs 5 crore to Uchila Mahalakshmi Temple in Muzarai County. Speaking at a reception after attending Sri Brahma Kumbhabhisheka at the temple, as requested by the Mogaveera Sangha, the government would provide […]