Located 3,600 meters above sea level, a residential district of Lhasa hides the one and only mandala building (a symbolic Buddhist symmetrical structure) in the Xizang Autonomous Region in southwestern China. Once used as a granary for decades, it is now crowded with tourists in search of modern art.

The Jebum-gang Art Center just celebrated its first anniversary at the end of July. Although the venue was temporarily closed to the public due to a sudden appearance of the Omicron variant, the head of the art center told the Global Times that the current exhibition of art by abstract artist Ding Yi will reopen later and will be extended until October.

Before being a granary, the building that houses the art center was originally the Jebum-gang Lha-khang temple.

Since the center is located along a busy shopping street and a residential area of ​​Lhasa, the sound of local vendors selling their wares constantly echoes from the base of the high steps of the holy building.

Locals have witnessed the changes of this stunning example of Buddhist architecture. How did the changes in appearance of this building unite people’s patriotism? How did the local government manage to bring in experts to remodel the temple years after it fell into disrepair?

“The local government decided to contact us to follow the project as we transform the building into a public cultural space. They also presented us with new thoughts on the functions that the renovated building can bring to the public,” said Zhang Junyan. , curator of the museum. Jebum-gang Art Center and Tihho Art renovation team leader, told the Global Times. 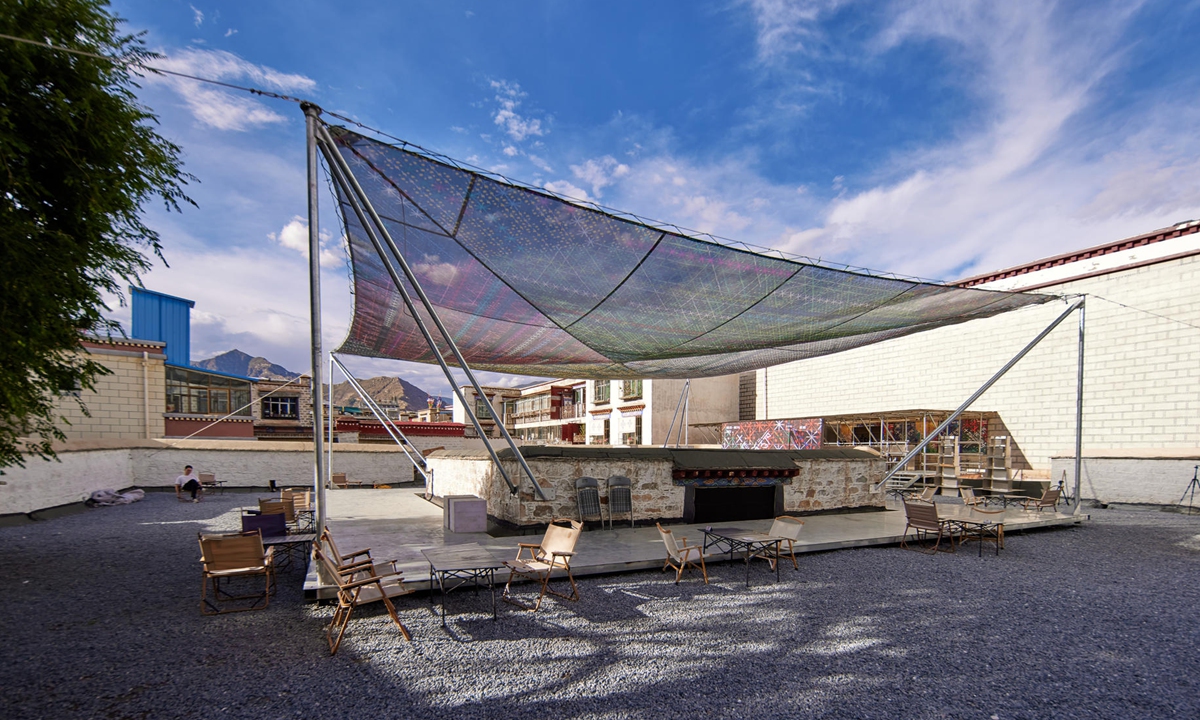 “One of the most exciting”

The only mandala building in Xizang, Jebum-gang Lha-khang Temple was first built during the second half of the 19th century, when the city was under threat from a British invasion from India.

The local leader decided to construct the Buddhist building to help defend the city against potential attack and “as a talisman to strengthen people’s sense of unity against foreign enemies through religion”, Zhang added.

This is not the first time that such an approach has been adopted. For example, the famous Yungang Grottoes were created by the order of an emperor of the Northern Wei Dynasty (386-534) to quell ethnic strife through the spread of Buddhism.

Since 1996, architectural expert Andre Alexander has been involved in the planning and implementation of conservation and rehabilitation projects at Xizang, where he and his team had consulted and documented many Buddhist works of art and buildings from around the 7th century to 21st century.

In his book The temples of Lhasahe called Jebum-gang Lha-khang Temple “one of the most exciting historical buildings” in Xizang.

The three-story temple was built with a strict symmetrical pattern. For example, the first floor hallway was built in a zigzag pattern. Outside, whenever the wind blew, the wind chimes hanging around the temple could be heard from far away.

Many locals still tell stories of how the sound of the temple’s melodious bells would reverberate throughout the ancient city of Lhasa – that is, until 1904 when the British army razed the temple as she invaded the city.

When the Tihho Art team took over the protection of the temple from the local government, the top two floors of the building had been destroyed, along with the bells.

Some of the paintings of Buddhist gods and goddesses were still visible, but most were out of focus and their subjects barely discernable. Meanwhile, fire marks from the building’s blaze could be seen on some carved wooden decorations.

Knowing in the 21st century

When the Jebum-gang Art Center opened on July 25, 2021, there was ample lighting in the building, so visitors held an LED light in their hands like a torch to appreciate the repaired murals as they were walking in the dark.

Since 2015, the local government has decided to involve architects, Buddhist experts and an artistic team in the renovation project.

Xia Yujun, an architect born in the 1990s, participated in the renovation of this 200-year-old building. He spent three years thinking about every detail of this building after graduating from the UK and coming to Xizang in 2016.

“[When tourists take a close look at the murals] it forms a connection between them and the building itself,” Xia told China Youth Daily when the art center opened in 2021.

“Everyone discovers different objects from the murals. Some who love animals notice the valuable wildlife in the mountains and some historians spot signs of British troops who passed through here,” he added.

After visiting more than 1,000 temples in Xizang, Xia now teaches at Xizang University. He noted that as Xizang’s first renovated ancient art center, “the temple carries the mission of traditional Chinese aesthetic education.”

Since 2018, the local government has invested large sums of money to carry out comprehensive repairs to the temple, including reinforcing the foundations and the roof with specially made local materials and bringing in professionals to restore the murals.

In the four exhibitions held by Zhang and his Tihho team over the past year, the most recent Ding Yi and his abstract art on the theme of the Himalayas the exhibit best represents the intention of the group when it took charge of the preservation of the temple.

“We decided to make it a modern art space because we believe our mission is to express traditional culture using contemporary language,” Zhang said.

Moreover, due to the purpose for which the temple was built, “there are many expressions of patriotism both architecturally and historically. Therefore, it is also a patriotic education base for cooperate with local students”.

Indonesians celebrate Wesak in the largest Buddhist temple in the world

MAGELANG, Indonesia (AFP) – Hundreds of lanterns have been released into the sky by Indonesian Buddhists celebrating Wesak Day at Borobudur Temple for the first time since the coronavirus pandemic hit the country. More than a thousand Buddhists from across the archipelago gathered at the world’s largest Buddhist temple, located in Magelang, Central Java, to […]

Earlier this month, the North Texas Thai community gathered in unity, many wearing traditional national costumes but all wearing protective masks, at Wat Dallas for an annual fundraising event that has had special significance this year. Despite the changes forced by COVID-19, including fewer people (around 100 instead of the usual 500 plus), the ceremony […]