On a solitary peak in the Sierra de Tepoztelan in the state of Morelos in Mexico stands the Aztec temple of El Tepozteco. The temple is dedicated to an unusual deity, Ometochtli – Tepoztecatl, one of the Centzon Totochtin, a group of 400 rabbit brothers and sisters, who presided over drunken revelry.

Besides drunkenness and taking pulquated, the traditional alcoholic drink of the Aztecs, Ometochtli (two rabbits) – Tepoztecatl, the leader of the 400 divine rabbits, was also the Aztec god associated with fertility rites and the Moon. He is normally depicted in drawings with his nose pointing up and his face colored half red and half black.

A design from the Florentine Codex that depicts the female goddess Mayahuel and the making of pulque. ( Public domain )

The 400 rabbits and the stages of drunkenness

For a culture that had strict laws governing the consumption of alcohol, the Aztecs had an abundance of drink gods – 400 to be precise! They were all descendants of the goddess of alcohol, Mayahuel, and Petecatl, the god of medicine. While Mayahuel embodied the agave or the maguey plant which gave the sap for pulquatedPetecatl is said to have discovered the fermentation process that gave it its punch.

Pulqued played an important role in the religious rituals of the Aztecs but it could not be freely absorbed by everyone. While old people were allowed to drink as much as they wanted, young people, if caught drinking, were severely punished. So much so that they could even face the ultimate penalty of death by strangulation. 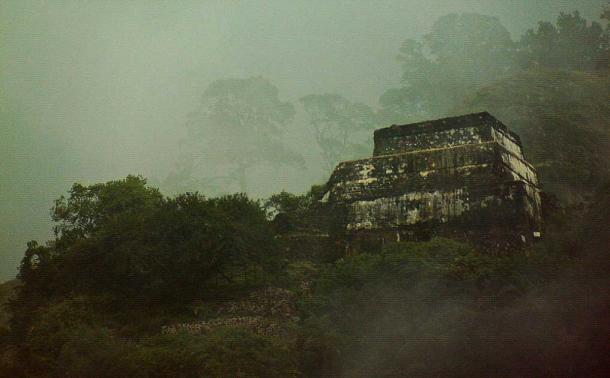 This strict regulation of alcohol consumption has been attributed to the myth of Mayahuel having once offered some pulquated to the king of Tula. This intoxicated him so much that he ended up raping her. From then on, the consumption of alcohol would have become the prerogative of old and experienced men who could control themselves.

Mayahuel had 400 children (the Aztec equivalent of infinity) with her husband Petecatl. And she had an equal number of breasts, all of which provided quality fermented maguey sap to suckle them. These infinite children of Mayahuel were depicted as rabbits. Having so many mouths to feed, Mayahuel was also the goddess of fertility and food.

The Aztec name for Mayahuel’s children was Centzon Totochtin , literally 400 rabbits. But they were often called the Aztec gods of drunkenness. Although most of these rabbit siblings were only referred to by numbers, some had names. Strangely, there was not one rabbit but two rabbits or Ometochtli, their leader, was also called Tepoztecatl. 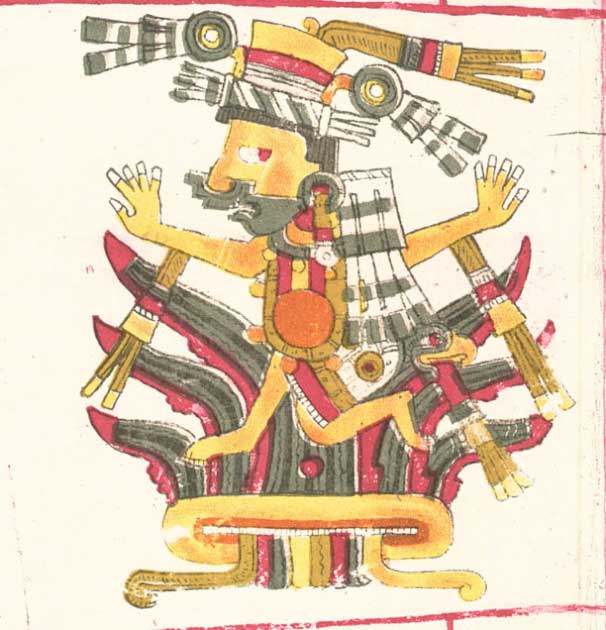 A drawing of Mayahuel, one of the deities described in the Codex Borgia. ( Public domain )

The archaeological site of El Tepozteco

Dating to somewhere around the middle of the Postclassic period (950-1521 AD), the archaeological site of El Tepozteco consists of a series of terraces and a small pyramid. The temple is built to the west of the site at a height of 2,310 meters (7,579 ft) above sea level. The temple was an important center of pilgrimage, attracting visitors from as far away as Chiapas and Guatemala, although the Tepoztecatl cult is local to the site.

A 6.4 meter (20.99 ft) high platform supports a 3.3 meter (10.82 ft) high temple base. The remains of the temple building, which are now 2.7 meters (8.8 ft) high, are perched on this base. The temple consisted of two halls. The first hall opened onto the temple stairs, with two pillars flanking the entrance.

There was a small hollow in the center of this room where traces of charcoal and copal, the aromatic resin ceremonially burned as incense in pre-Columbian Mesoamerica, have been found. It was in the second hall, the small inner sanctum, where the statue of Tepoztecatl was probably placed. The entrance to this room also had a pillar on each side.

Later alterations to the temple site included the addition of stone benches and a small projecting cornice. The cornice has bas-reliefs of glyphs of the 20 days of the sacred tonalpohuilli calendar. Other additions were houses built for the resident priests and their assistants on the east side. 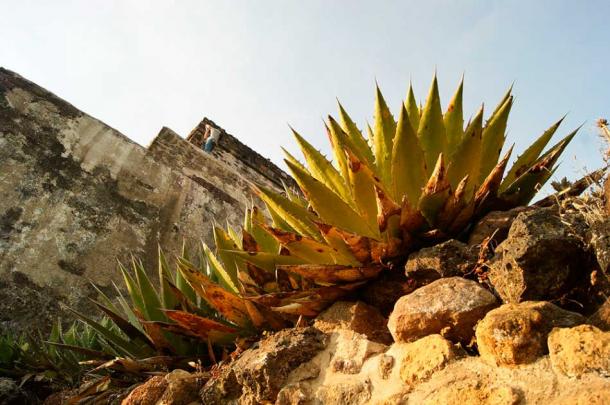 Inside the temple ruins, two fallen stones with glyphs were discovered. One mentions the name of the eighth Aztec emperor Ahuizotl, the other the calendar date “10 rabbit”. This date corresponds to 1502 AD of the Gregorian calendar, the year of the death of Emperor Ahuizotl. Some archaeologists have interpreted these glyphs to mean that this was the year the temple was built. Others have concluded that the stones were installed later to commemorate the emperor’s death.

Other glyphs include a turquoise crown and a shield with arrows, symbolic of the Triple Alliance between the Nahua altepetl city-states of Mexico-Tenochtitlan, Tetzcoco and Tlacopan. The agreement formed the basis of the Aztec Empire which ruled central Mexico and eventually most of pre-Spanish Mesoamerica. 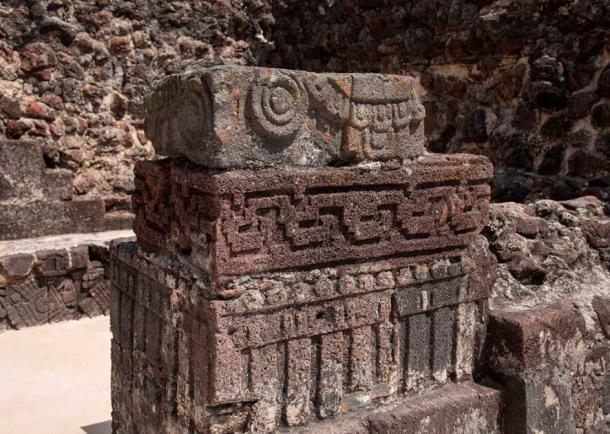 The glyphs bearing the symbols of the Triple Alliance suggest that parts of the temple, particularly the stone benches, were added somewhere after 1452 AD, when the Alliance conquered the city of Tepoztlan, overlooking which the temple was built. built. The El Tepozteco temple was probably abandoned somewhere between 1519 and 1521, when the Spaniards under Hernan Cortes sacked Tepoztlan and burned it down.

The remote ruins of El Tepozteco today recall the remarkable cult of the drunken rabbit god who, contrary to the images of eccentric drunkenness his name conjures up, advocated strict control of alcohol consumption, especially among young people.

“In Aztec ritual life, celebrants were permitted to drink alcohol on certain calendar-governed feasts, but even then quantities were limited and taken under clearly prescribed conditions,” says professor Catherine DiCesare. associated with the Department of Art and Art at Colorado State University. History who has written and lectured extensively on Aztec art and festivals. “Among the Aztecs, excessive alcohol consumption was a marker of uncivilized status,” she adds.

Seepage at the gold-plated sanctum sanctorum of Sabarimala Temple

A leak has been discovered in the gold-plated roof of the sanctum sanctorum of the Sabarimala Ayyappa temple. The gold plating was an offer from exiled industrialist Vijay Mallya, who sponsored the venture at a cost of around Rs 18 crore. According to the Travancore Devaswom council which runs the hill shrine, located about 170 […]

Over 150 injured, 400 arrested as Palestinians clash with cops on Temple Mount

Clashes erupted between Palestinians and Israeli police on the Temple Mount early Friday morning, as rising tensions, terror threats and the observance of major holidays all converge around the holy flashpoint site. Skirmishes between police and worshipers at the site were reported around 6.30am, with officers entering the compound and clashing with people barricaded inside. […]