Every nook and cranny of Lepakshi Temple, which is on UNESCO’s tentative heritage list, celebrates Vijayanagara architecture

Every nook and cranny of the temple, which is on UNESCO’s tentative heritage list, celebrates Vijayanagara architecture

It is a land dotted with as many stories and myths as beautiful sculptures and engravings. At each step a new spectacle, a new paradigm, a little anecdote, a pillar or a mantapa awaits the visitor.

Lepakshi at Rayalaseema in Andhra Pradesh, a marvel of stone, appeals to tourists as well as history and heritage enthusiasts.

The Veerabhadra Swami Temple here, which has found a place on the UNESCO tentative list of World Heritage Sites in India for 2022, is obviously the focal point. Situated on top of the Kurmasailam hill (shaped like a turtle), it is a glorious example of the very famous Vijayanagara architecture.

As this is a hot and rocky region, visitors are advised to reach the site early in the morning (the temple opens at 7am and it takes two to three hours to walk the route).


The name of the place itself is related to the Ramayana. Legend has it that Jatayu fell there after Ravana cut off his wings while trying to prevent Sita’s abduction. Rama came across the bird while looking for Sita.

After the injured bird related what had happened, Rama persuaded it to get up, “le, pakshi” (rise, bird in Telugu). A recent tourist addition to Lepakshi is a colossal concrete statue of Jatayu (in flashy paint) on a hill in Jatayu Park, just before leaving the highway to enter the temple. 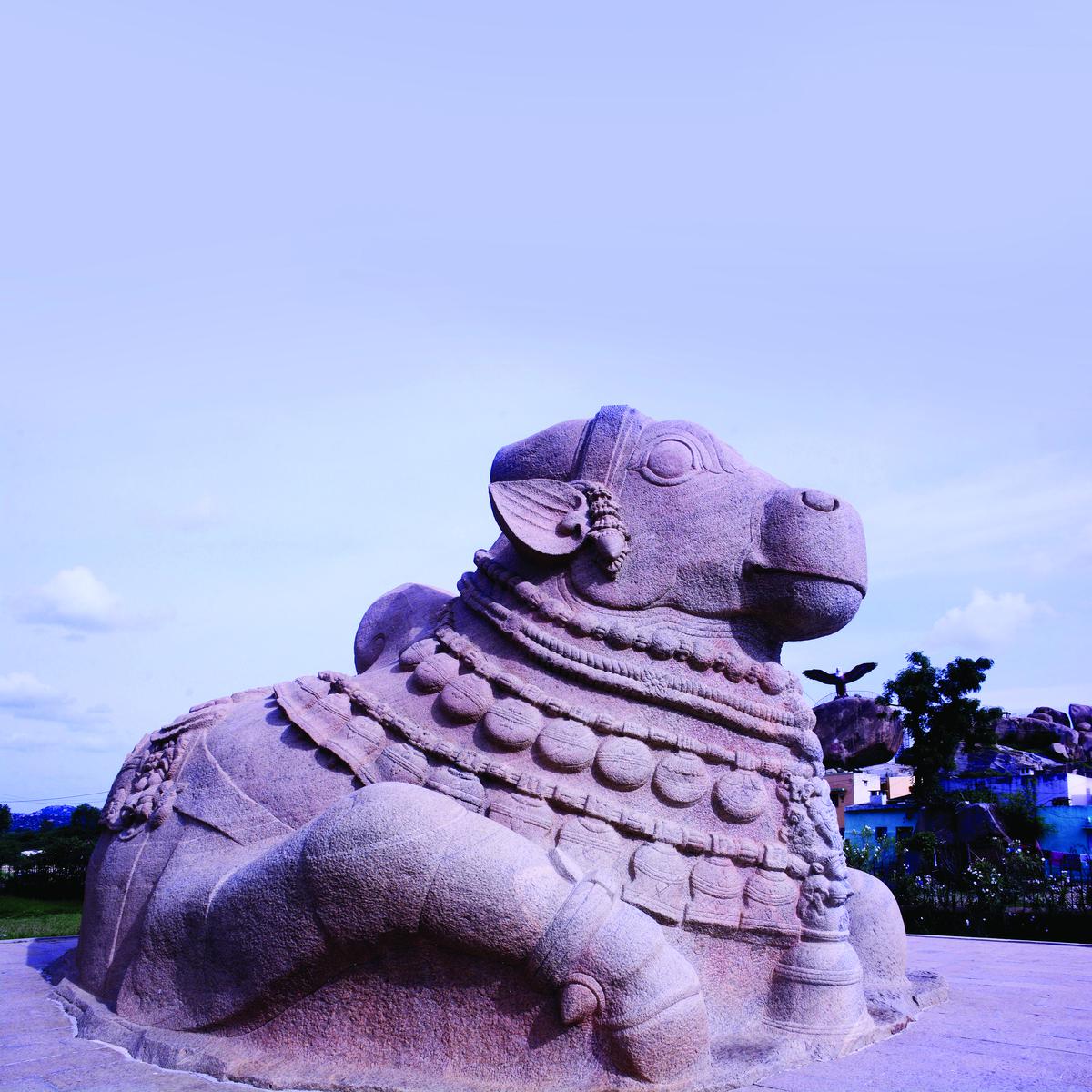 The Jatayu overlooks a wonderfully carved six meter high Nandi bearing layers of bells and ornaments. It is said to have been carved out of a monolith. Like the temple, it dates from the 16th century.

As you walk around the Veerabhadra Swami Temple, what first catches your eye are the long pillared halls. Intricate carvings of yalis, flowers, trees, animals, yakshas and yakshis can be seen on each pillar.

For each part of the temple, there are two layers of stories – one that connects it to incidents in the Ramayana, and the other is about life during the reign of the Vijayanagara kings. 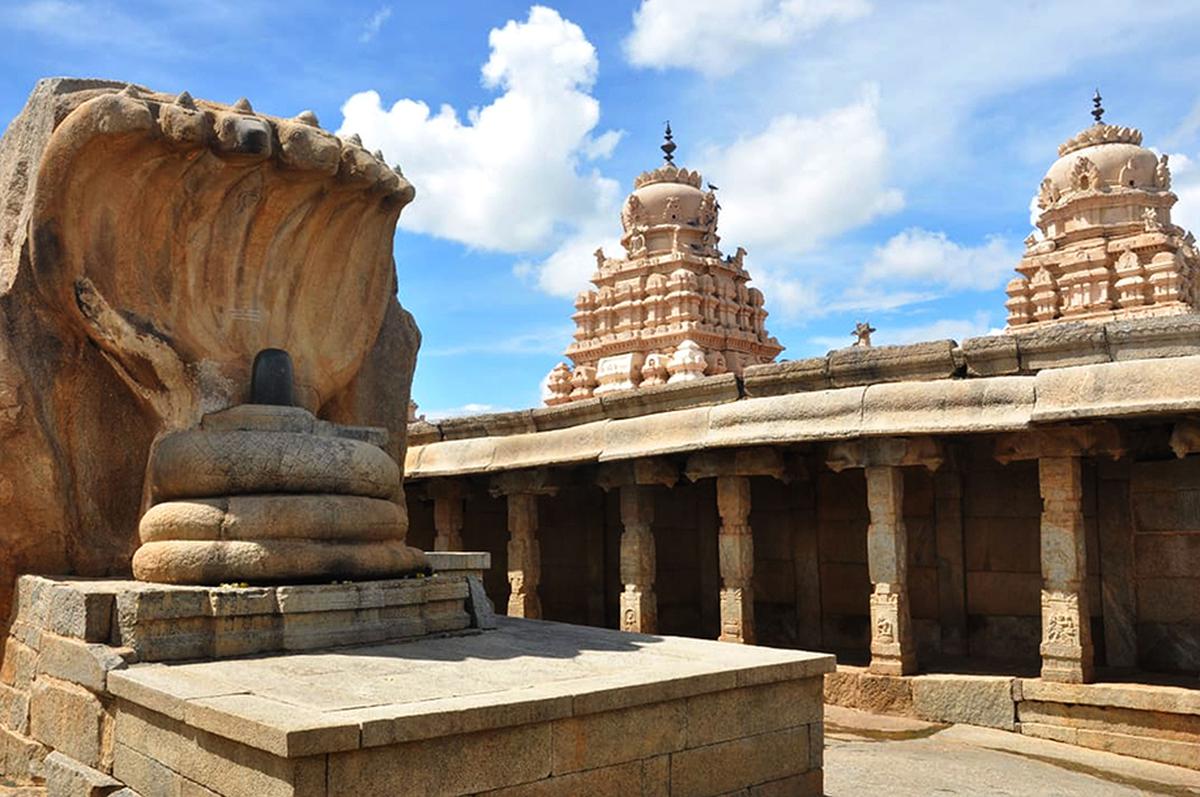 The imposing statue of Nagalinga, with the seven-hooded serpent coiled around a linga on a five-foot platform, is an awe-inspiring sight.

You have to stand and silently watch the serpent rise against the sky. Passing by, looking for the famous Ganesha, you come across carvings of a spider-like creature and a man performing a lingam abishekam. In the absence of documentation, these engravings can be interpreted according to one’s imagination. And add to Lepakshi myths.

The nearly six-foot Ganesha behind the Nagalinga, and surrounded by an incomplete mantapa, recalls one of the Sasivekalu and Kadlekalu Ganesha statues at Hampi – the rocky terrain and the fact that it also belongs to the Vijayanagara empire establishes the link.


The entire temple complex is said to have been rebuilt by Virupanna and her brother Veeranna during the reign of Vijayanagara King Achyuta Devaraya. The brothers were officers/governors in the Penukonda region.

The original structure is said to have been built by Sage Agastya and is mentioned in the Skanda Purana as one of the 108 Saivaite pilgrimage centers of ancient India. Again there are several stories and versions – Virupanna is said to have built the temple without the king’s permission to use royal funds (when the king was away) and so the king on his return ordered construction stopped , and Virupanna be blinded . But Virupanna was said to be so upset that he gouged out his eyes and threw it at the temple walls which bear two red spots. A man sweeping the temple complex points to “bleeding eyes”, otherwise you can almost miss him.

As construction was abruptly halted, what you next encounter is the unfinished kalyana mantapa on a raised platform, with over 30 carved sandstone pillars. Two covered pavilions appear more complete and ornate. Legend says that Shiva and Parvati got married here.

As you enter the main shrine, the 70-pillared nrutya mantapa, the detailed and beautiful carvings therein depict gods and performers playing musical instruments and dancers in various poses and mudras. The high ceiling is filled with long panels of frescoes that you have to crane your neck to see (details in box 1). There is also the hanging pillar, and I see a group of enthusiastic women trying to get a dupatta under it.

Besides Veerabhadra, there are shrines dedicated to Durga, Papanasesvara, Raghunatha, Parvati, Ramalinga and Hanumalinga.

The priest is a jovial old man, who tells the story of the temple (in at least three languages) before performing the puja. We leave reluctantly, realizing how little we know about our own country.

How to get there: Lepakshi is about 123 km from Bangalore (two hours drive) and 390 km from Chennai (eight hours drive). The paintings are somewhat similar to the Ellora paintings in terms of the color palette of brown, ocher, red, off-white, and black, but the style is very different. The details of the women’s jewellery, clothing and hairstyle are fascinating; the unique elongated headgear of men, including gods, is another eye-catching feature. (I see resemblances to Kalamkari’s work.) The central part of the roof near the garbha griha has a mural of Veerabhadra, flanked by Virupanna and Veeranna worshiping him. Measuring 23 feet by 13 feet, it is said to be one of the largest murals in Asia. There are also depictions of at least 14 avataras of Shiva, as well as scenes from the Ramayana and Mahabharata.


One level below the kalyana mantapam is a slab with Hanuman’s image carved on it. At its base is what looks like a huge circular recess surrounded by several similar smaller recesses. This is supposed to be the plate that site workers used to eat food from.

The Bengaluru-based writer is a freelance journalist.

Jaunsar Bawar (Uttarakhand), June 12 (IANS): While most people are drawn to Uttarakhand because of its scenic beauty, others visit the state for its temples. One of them is the ‘Mahasu Devta’ temple, located on the Tuini-Mori road in Hanol, Dehradun, and is visited by thousands of people every year. ‘Mahasu Devta’ is also […]

Temple University Employer: Philadelphia, Pennsylvania, USASite: Fri 14 Jan ’22Posted on: FulltimeType: The Tyler School of Art and Architecture at Temple University invites applications for a full-time, tenure-track position in Landscape Architecture with a specialization in Ecological Restoration at the rank of Assistant Professor beginning in the fall of 2022. We invite applicants to join […]

Fri. Jeong Kwan Seunim browsed seasonal produce from the O’Donohue Family Stanford Educational Farm on Monday when she visited Stanford to give community members a cooking demonstration of Korean temple cuisine. In line with the green and forward-thinking future of the Stanford Food Institute (SFI), Buddhist nun Seon and recipient of Asia’s 50 Best Icon […]