21st of August : After thirty-seven years, I found myself staring again in silence past the huge, colorful and beautifully carved north entrance tower of the Meenakshi Temple in Madurai. I imagined what skill it would have taken the artisans of antiquity to painstakingly carve the images that are still enjoyed by countless people even after centuries.

The 14 Gopurams, as they are known locally, are an impressive sight and a typical representation of Dravidian architecture. This temple has around 33,000 carved images of gods as directed by Shilpa Shastra. The construction also conforms to the principles of Vastra Shastra. We stopped to admire the bathing pool and were told that it is considered a living temple where all the ancient rituals prescribed according to the various shastras are strictly performed with devotion. 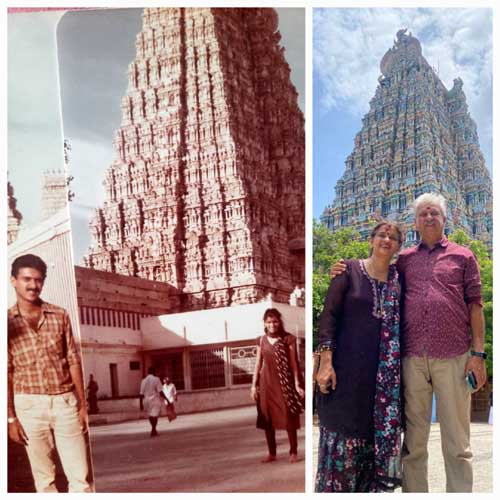 Our guide told us about the legend associated with this temple. A king of the Pandyan dynasty had prayed for an heir and a 3 year old child with 3 breasts came out of her sacrificial fire with a voice saying that the third breast would drop when she met her future husband. He raised her as a son and she conquered many neighboring kingdoms, which is a very different way of raising daughters in those times. In Kailasa, she was about to fight with Lord Shiva (also called Sundereshwar), when her third breast fell out and she knew she had found her suitor. It is said that their marriage was celebrated at this place and Lord Vishnu gave her as his brother.

The 4ft main idol is said to have 3 breasts and is made of a solid block of emerald. She is depicted in green color, which is also associated with the planet of learning Mercury. We are asked to keep our eyes open and our minds blank when we stand in front of the idol…no need to ask anything, she knows what is good for us!

It is one of the few temples in South India dedicated to the goddess whom we worshiped before heading to the other shrine of Lord Sundareshwar. These two main shrines have shiny golden colored gopurams.

Inside the vast temple complex, I admired the colorful frescoes and continued to touch many carved images as I noticed their beauty and attention to detail. .

Particularly interesting was the multi-directional painting of a shivalinga on the roof, which seemed to point towards us as we moved 360 degrees. It was an absolutely stunning visual delight.

We bowed in reverence to the deities of many other smaller shrines within the temple complex. We visited the hall of 1000 pillars (16 pillars were outside) with absolute alignment of the pillars – vertically, horizontally and even diagonally. Each pillar had a different carved image and I imagined how artistic performances or scholarly encounters would have taken place within these ancient walls.

We are so lucky to have such incredible heritage sites in our country that attract us with their great spiritual power.

As I pulled out the obligatory before and after photo in front of the front tower, I smiled humbly for the blessings Devi has bestowed throughout our 37 years of marriage. Visit Meenakshi Temple for your own unique experience! 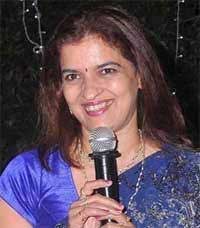 Shobha Rao Smilemaker’s vision is to live in a world where people use their ability to find and smile in any situation. She is a lawyer by training, soft skills trainer by passion, motivational speaker, freelance journalist, best-selling author, avid traveler and founder of ‘Smilemakers Trainings’. She can be reached at www.shobhasmilemaker.com.

It is believed that the passages of the Chavín de Huántar temple were sealed around 3,000 years ago. Image credit: Mark Green/Shutterstock.com A network of eerie chambers and passageways built in an enigmatic temple complex in the Peruvian Andes may have been used for ritual practices involving psychedelic plants, researchers say. The mysterious structures were […]

Explained: The Persistent Theory That The Taj Mahal Was A Hindu Temple Called ‘Tejo Mahalaya’

Allahabad High Court, Thursday May 12 rejected a petition filed by BJP leader Rajneesh Singh calling for an investigative committee to establish ‘the true story of the Taj Mahal’, and for over 20 sealed ‘halls’ to be opened to search for the possible presence of idols of Hindu gods at the premises of the monument. […]

The Church of Jesus Christ of Latter-day Saints celebrated a new beginning this weekend in Yorba Linda. The church dedicated a new temple on Saturday, which will be its ninth in California and the second in Orange County. The temple will serve the LDS community within an 18-square-mile radius, providing space for “the most sacred […]