Like bees pollinating rose bushes, the Temple David social hall was abuzz on the evening of October 27.

Interfaith volunteers worked at a breakneck pace, packing cookies baked earlier in the week. The treats, many cut in the shape of a rose, were then delivered to first responders, the 10.27 Healing Partnership, the Jewish Community Center of Greater Pittsburgh and Hello Neighbor, in memory of Rose Mallinger.

Mallinger’s great-niece, Rachael Farber, and her mother, Beverly, shared the recipe that belonged to both Rose and her sister, Sylvia. The sisters lived in side-by-side houses where they raised their children. A rosebush grew between the two houses.
Joann White served on the Temple David 10.27 Commemoration Committee. She said the congregation decided to bake the cookies because Farber is a member.

“I think for all members of the Jewish community, everyone has a little different element to how they are connected,” she said. “Everyone is connected in some way to someone, but they’re probably the most personally connected because it was family.” 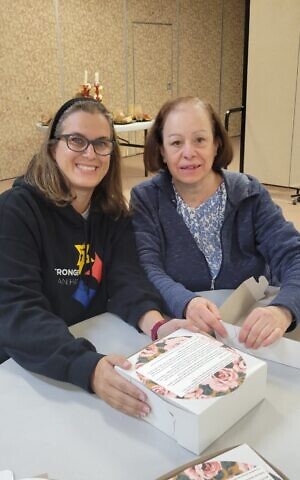 Temple David Rabbi Barbara Symons approached members of the Monroeville Interfaith Ministry with the idea of ​​helping with events the congregation was planning for the four-year commemoration of the massacre at the Tree of Life building.

Great care was taken in the project, Symons said, ensuring that all members of the Ministerium could participate if they wished. This included a conversation with an imam associated with the Ministerium to confirm that members of the Muslim community could bake the cookies containing vanilla, an ingredient that includes alcohol, a banned substance in Islam.

The Farbers’ involvement made the project particularly meaningful, Symons said, but so did the opportunity to do more than just hold a memorial ceremony.

“We wanted to be on the pitch,” she said. “There are people who have spent hours thinking about this – what the box looks like with typical Temple elegance, and how much [cookies] fit in the box? He seemed to utilize the diversity of talents within Temple. Everything felt good. 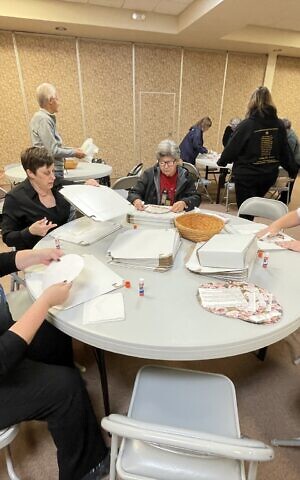 Included with baking and decorating, folding boxes and labels stuck on the filled containers and affixed ribbons, the volunteers also delivered the cookies. The scope of the project was large. Symons said there were enough boxes for 2,400 cookies, all of which were used.

White said he thought about who got the cookies. Giving Hello Neighbor cookies, she noted, was a direct reaction to the shooter’s motives: He expressed his hatred against immigrants before entering the Tree of Life building.

The involvement of the interfaith community, White said, dates back to October 27, 2018.

“The rabbi is at the Interfaith Ministry in Monroeville, and that awful morning they called Barbara and said, ‘Anything you need, we’ll come,'” White recalled. “So many people showed up. There were tears everywhere, the whole community was involved. You know, it’s not all the time, but on this anniversary, it’s something that everyone thinks about and asks: ‘What can we do to show respect, to remember and not to to forget ?’

Deacon Kelly said he wanted to be in interfaith service to fight hate and show unity.

“The climate around the world is so divisive,” he said. “We need to show solidarity and support each other.”

“Our congregation has been enriched through a relationship with Temple David,” she said. “This is when they needed us to show us.” PJC

David Rullo can be contacted at drullo@pittsburghjewishchronicle.org.

Sift the dry ingredients.
Add the shortening and mix with a fork.
Add unbeaten eggs and vanilla.
Mix well.*
Go out.
Use cookie cutters to cut cookies into shapes.**
Bake at 375 degrees F for 8 minutes.
Decorate once cooled.

* It is helpful to refrigerate the dough for at least 4 hours before rolling it out.
**If you sprinkle colored sugar, do so before baking.

The Andhra Pradesh Tourism Development Corporation (APTDC) came up with the idea of ​​popularizing the annual three-day astronomical wonder of the rays of the sun falling on the feet, navel and crown of the presiding deity of Lord Sri Vedanarayanaswamy temple at Nagalapuram in the district of Chittoor. For the first time, tourism officials are […]

“The man who fell to earth”: how the temple of Angkor Wat inspired the scenography

Asia’s tallest temple based on Gita teaching coming to Kurukshetra