Our culture is full of rich symbols. The mystique of mythology has long had a strong hold on the collective imagination, and the tradition of casting Hindu deities in gold bodes well.

Sneha Saksena, co-founder and designer of The OLIO Stories, brings us back to their debut collection, ‘Devi’. The series of three discreet pendants featured a trilogy of goddesses. “We just felt there was a void in the market. People were talking about religion or culture, but it was mostly about gods, and no one was talking about our goddesses. So we chose the three goddesses – Saraswati , Lakshmi and Durga. They are highly revered because they play such an elemental role in the creation, protection and destruction of the universe,” she says. Through its modern legacies, the brand has always been committed to telling the lost stories of ancient India and explore themes of friendship, family and womanhood. Wearing these temple-inspired pieces roots OLIO’s NRI customers in their culture and reminds them of their home. self. 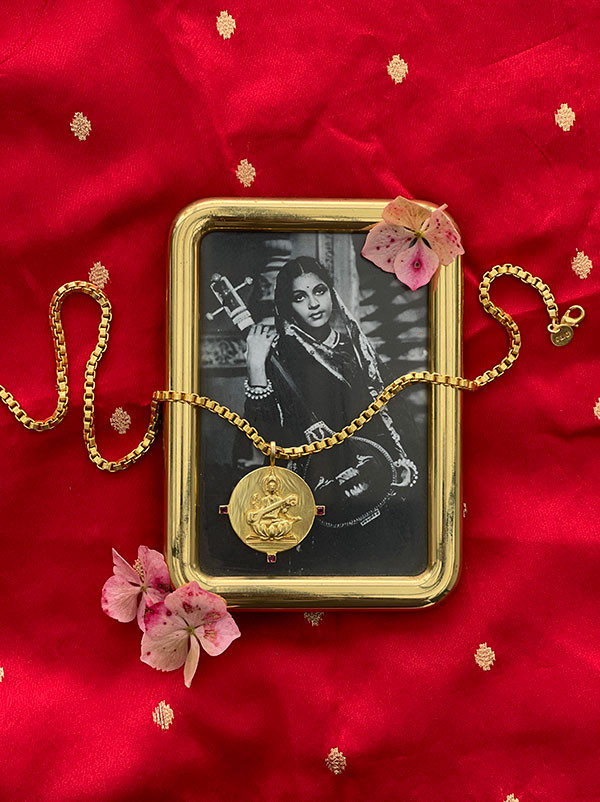 The ‘Devi’ series by The OLIO Stories 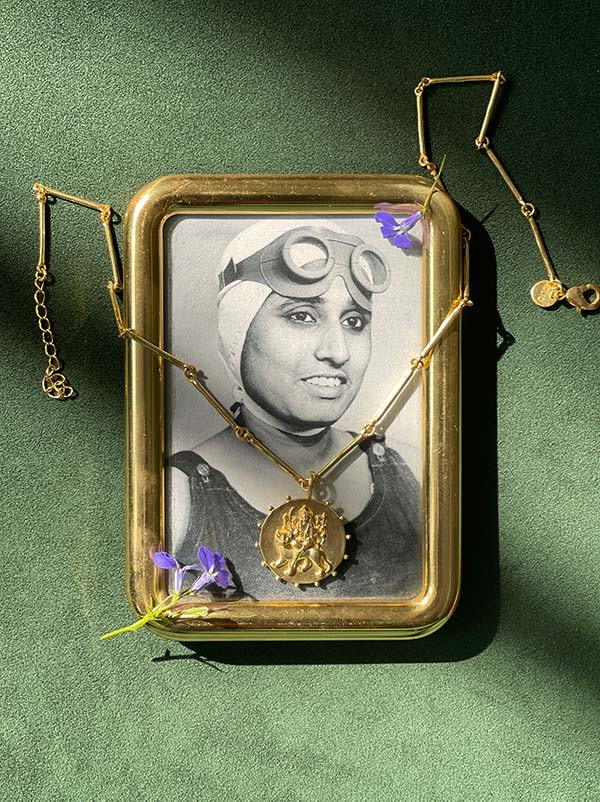 Temple jewelry, with its roots in the Chola dynasty around the 9th century CE, is a distinctive feature of South Indian bridal attire. Known for their opulent intricacy, temple jewelry features designs of deities, sacred objects, and architectural details of temples. Although originally only intended to adorn religious idols, devadasis or temple dancers also began to wear replicas of this elaborately handcrafted jewelry as a sign of their devotion. In the 21st century, temple jewelry is meant to invoke a sense of divinity in any bridal trousseau and is considered a lifetime investment. While its cultural importance endures, some new-age jewelry brands are reinventing this style of ornamentation for their contemporary audience.

Akanksha Arora, CEO of Tribe Amrapali, shares his thoughts: “Temple jewelry has a fairly consistent demand as it is considered auspicious and has its own charm. What people are looking for is the detail and intricacy that is at the heart of this jewelry. Temple jewelry represents the history, culture and architecture of India. People look for numbers or symbols they associate with when shopping for jewelry. Handcrafted figures of gods and goddesses are carved into pieces sometimes embellished with precious stones, giving fine detail to the piece.

“I remember Aashna and I were discussing our relationship with these goddesses, how everyone has a bit of the goddess in them. If it is Lakshmi, Durga or Saraswati, even our clients identify with one of them because we have brought out their personality. You may resonate more with Saraswati if you are an artist or love music. On the other hand, if you are an entrepreneur or a sportsman, you might identify with Lakshmi. It’s as if we simplified it in today’s parlance. Most of our jewelry is made with a lot of emotional and historical relevance because the idea is to tell stories rooted in the Indian subcontinent,” says Saksena. 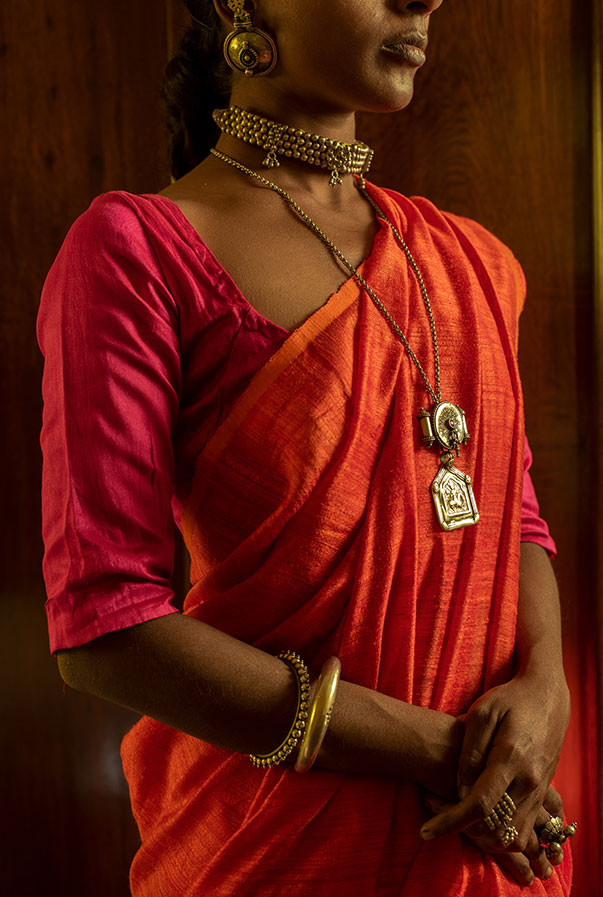 Indigenous influences and cultural motifs are also at the heart of Earthament, a Kolkata-based brand that retails original, completely handmade jewelry. Founder Monalisha Manna found herself drawn to the architectural beauty of temples during her studies in Karnataka and Tamil Nadu. “The temples of South India and their intricate stonework are so amazing. Even the branches of Odisha inspired me, and I’ve always wanted to introduce those elements into our metal clothing,” she shares.

Themes of femininity, beauty and grace also find strong resonance in her work. The clothing of Odissi dancers particularly influences it. “I really like a well-known Odissi dancer from Calcutta named Shormila. His students have been part of my close circle since school and university, and I have an endless admiration for their art. It is a very sensual dance form from ancient India. It puts a lot of emphasis on body structure. As a woman, it’s always been very interesting to me to see how body shape, lust, and movement can connect to the mind and influence your fashion sense. Madame Shormila and her students were inspiring in the way they wore their jewelry with a strong character,” says Manna. 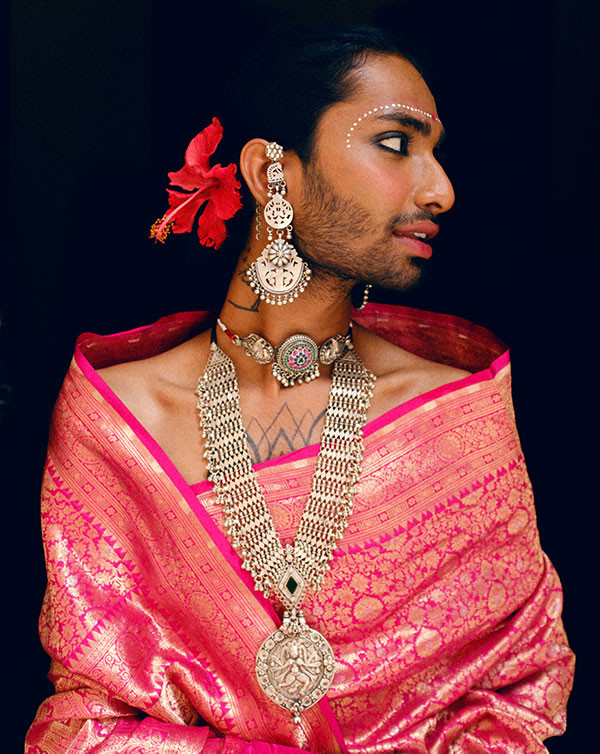 She also dives into the rich pot of tribal culture for Earthaments temple jewelry. For the sake of conservation, the brand recovers deformed or broken pieces with mythological motifs and gives them new life. “We travel and collect fragments of old silver jewelry from the tribal areas of the country in western India, northern regions like Himachal and Kashmir, and a few places in Karnataka and Tamil Nadu. They are truly vintage – 50-100 years or more. Most jewelry is not in wearable condition. We collect them and put them together to create newer, more wearable designs without losing the vintage feel,” she explains.

Aavriti Jain’s brand, Dhora, also offers beautiful Indian karigari for temple jewelry that you can treasure for many festive seasons. Like many designers, Jain harbors a love for vintage. “I’ve always been a fan of old vintage pieces. Even in my mother’s wedding photos, I noticed her wearing temple jewelry. There is something very elegant and pure about these pieces, which inspired me to design and assemble this line,” she says. She further explains where she comes from as a designer: “Dhora is emotive jewelry, which is essentially the fine line between artisanal jewelry and religiously inspired jewelry. We want to design pieces that are imbued with emotions of joy, hope, power or calm. We offer it to the wearer using a flower, a leaf, a lion’s tooth or a god figure. I believe jewelry is meant to help you express yourself, feel connected, and tell your story.

The intricate temple jewelry of Dhora 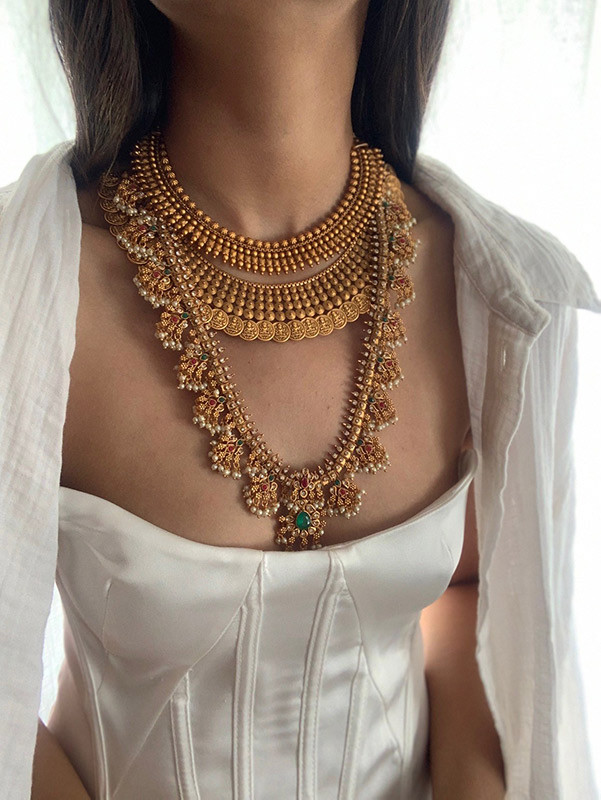 The intricate temple jewelry of Dhora 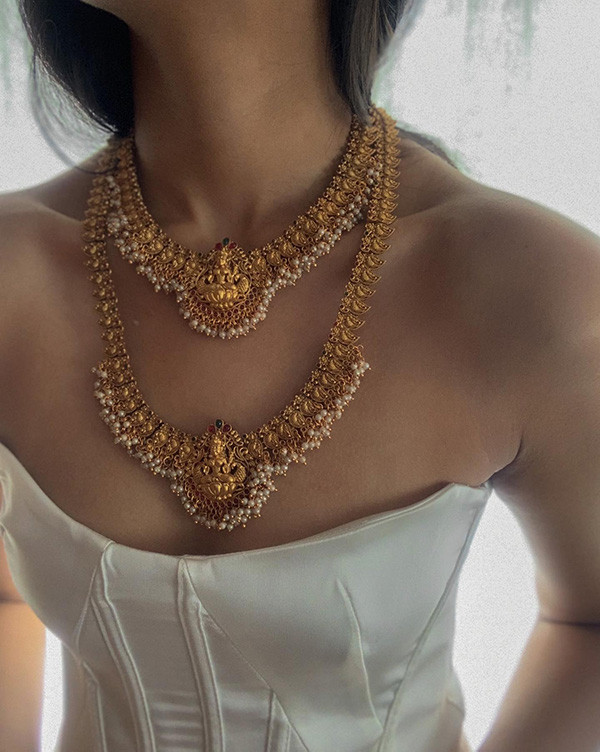 Speaking of the evolution towards the contemporaryization of these designs, Akanksha Arora clarifies: “The jewelry of the temples was essentially made with gold donated to the temples of southern India. In the modern era, it has become more experimental. Besides gold, jewelry is also made of silver; you can dip it in gold. It also contains precious and semi-precious stones. Various patterns apart from gods and goddesses are added – you can see a lot of flora and fauna and other symbols apart from the traditional elements. 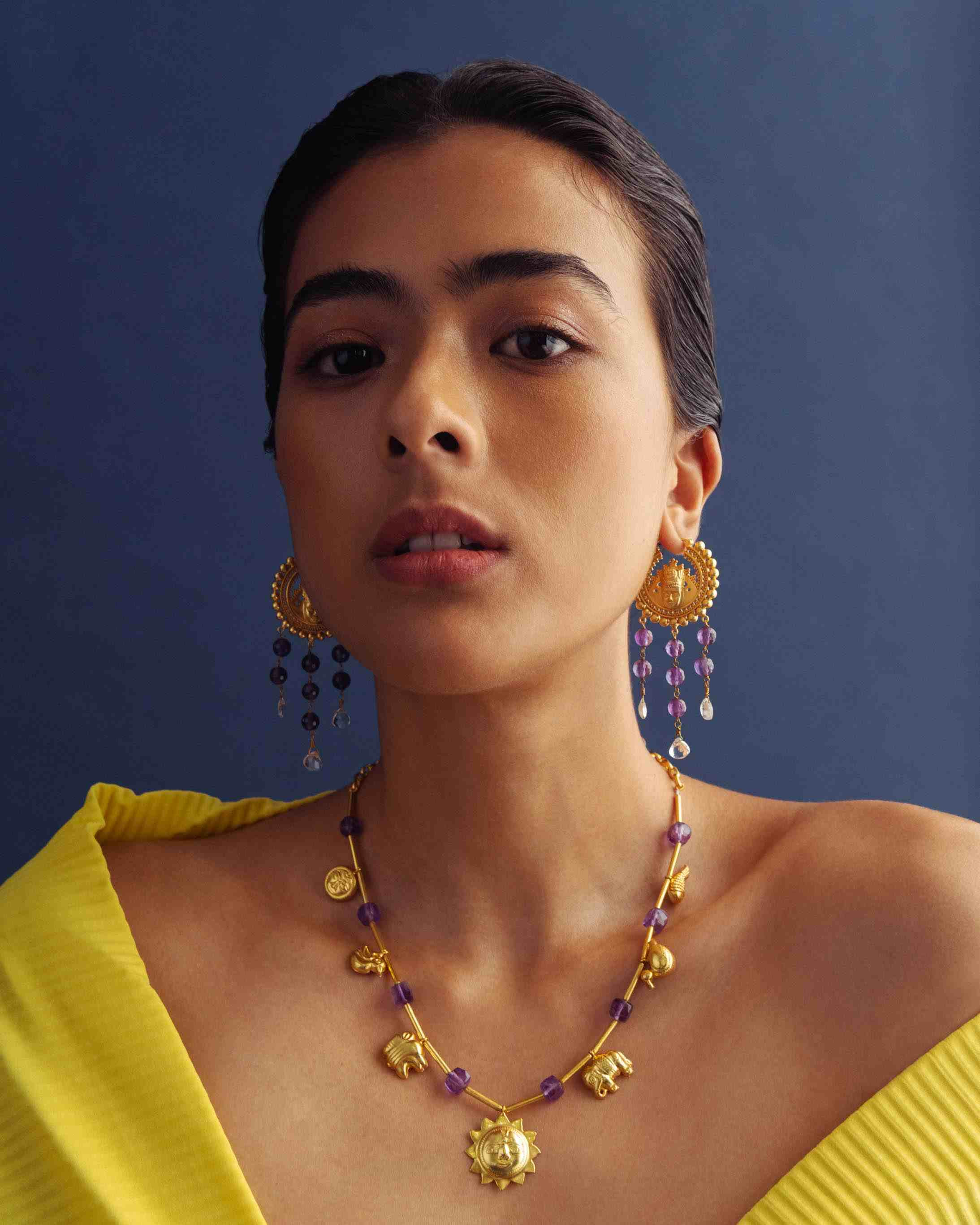 OLIO Stories’ latest collection, ‘Roshni’, features the Apsara Bali, a set of earrings featuring the face of the mythological figure of apsara engraved on them. The pair is made more whimsical with the addition of iridescent amethyst beads. “I was looking through a lot of images from the temples of Khajuraho, and this particular image stuck with me. In this document, the apsaras are very forgiving – they put on makeup, do their hair, or just rub something on their skin. I have been struck by the fact that we are all rooted in the same practices today and call it wellness or skin care.Also what is interesting about apsaras is that they are shapeshifters. Like us too. We have different roles in life, where someone is a dog or a mother plant. We do our job while getting into some form of fitness. There are so many roles that women play nowadays. So I thought that was very interesting, how we could understand that and our customers could relate to it,” Saksena shares.

But in a socio-political context where the divisions between different religious groups are widening every day, how does temple jewelry remain in a secular space, detached from associations with organized religion? Saksena reclaims politically charged motifs such as the lotus by using them in her designs. “Right now, in our country, religion and politics go hand in hand. But if you separate the two, I think it can be a safe space for everyone to express their thoughts and feelings through fashion and art,” she says. The potential for public reaction is a slippery slope for brands like his. But, she believes in telling stories and feeding them with nuance. For her, temple jewelry is more about culture: “It’s something that empowers you or reminds you of home. That’s it. It is about celebrating the female goddesses and the divine feminine. There’s so much power in there.

Explore Amansara, the temple of tranquility in Siem Reap

For the past two decades, Amansara has been the property of choice for discerning travelers seeking luxurious accommodations and a deeper connection to Siem Reap town. Recently, Prestige had the chance to visit this emblematic property, which will soon celebrate its 20th anniversary. The famous vintage 1962 Mercedes from Amansara Resort When I arrive in […]

It’s 9:32 a.m. when the wheels of my car are gathering dust along a nondescript road in Puerto Escondido. On this balmy morning on the Oaxaca coast, surfers are out before sunrise and nightlife revelers are still sprawling on the beach. My hand combs through a thick breeze outside my window and I wonder what […]