The Japanese word “shinnyo-en” is defined as a garden open to all, where everyone can discover and bring out their true nature. This description matches precisely a 26-acre location in Redwood City that is occupied by the US headquarters of an international Buddhist community of the same name.

The main temple of Shinnyo-en USA sits on a majestic open space on Bret Harte Drive. Its existence is not well known, even to neighbors, despite the temple’s importance to its practitioners and the welcoming attitude they have when visitors walk around the grounds.

Bret Harte Drive ends at the white doors of this beautiful tree-covered property relatively untouched by development except for the 100,000 square foot temple. The doors are open so that residents can walk through them every day; many are on their way to Roy Cloud School or just walking around.

O’Malley says the public is welcome during daylight hours to cycle the loop road through the property, but should be careful as the road is shared with traffic.

The Redwood City Parks and Arts Foundation has twice hosted its Temple Grounds White Picnic fundraiser. The location of the picnic is still kept a secret until the day before the event, adding to the surprise of attendees who were previously unaware that a Buddhist temple even existed in Redwood City.

Former house of the nuns

The property was purchased from the Sisters of St. Francis of Assisi, who had the building constructed in 1958 on a hill overlooking the bay area. According to Rev. Shunichi Ikehari of Shinnyo-en, the congregation of Catholic sisters used the building as a place of worship and also as a place to live, much like a convent. At one time, around 100 nuns lived on the property. They would open their doors to various groups, including those looking to complete religious retreats, he said.

As the sisters grew older and became less able to maintain the property, they chose to sell the plot. They interviewed many potential buyers, but settled on Shinnyo-en temple due to its mission and intentions to use the site.

“The sisters prayed inside this temple day and night and when we purchased the site we took care of their wishes to worship,” Ikehara said. “We made the promise to preserve what the Sisters of Saint Francis of Assisi had built.

The bond between the Buddhist temple and the Sisters of Saint Francis is a bond of mutual friendship between religious traditions. Yet nearly two decades after the property was sold, many artifacts inside the Catholic era remain, a legacy to the sisters who built it, according to O’Malley.

Honor to the sisters

The architecture of the temple is cruciform in shape, with benches in all directions. The followers of the Shinnyo-en temple chose to keep the pews out of respect for the sisters. The sisters also donated a statue of Saint Francis to the temple, which still stands in the hall of the main altar today.

“The sisters gave us their statue and we sent it to Japan so that we could replicate the statue and create one of the 7th century Shotoku princes,” Reverend Leopold Fan said. The two statues face each other, a symbol of unity between the sisters and the Buddhists.

There are four 12-foot stained glass panels that the Shinnyo-en Temple replaced with theirs, features not traditionally seen in a Buddhist temple, O’Malley said. A Japanese artist created the stained glass panels – four in all – that represent the different stages of Buddha’s life. 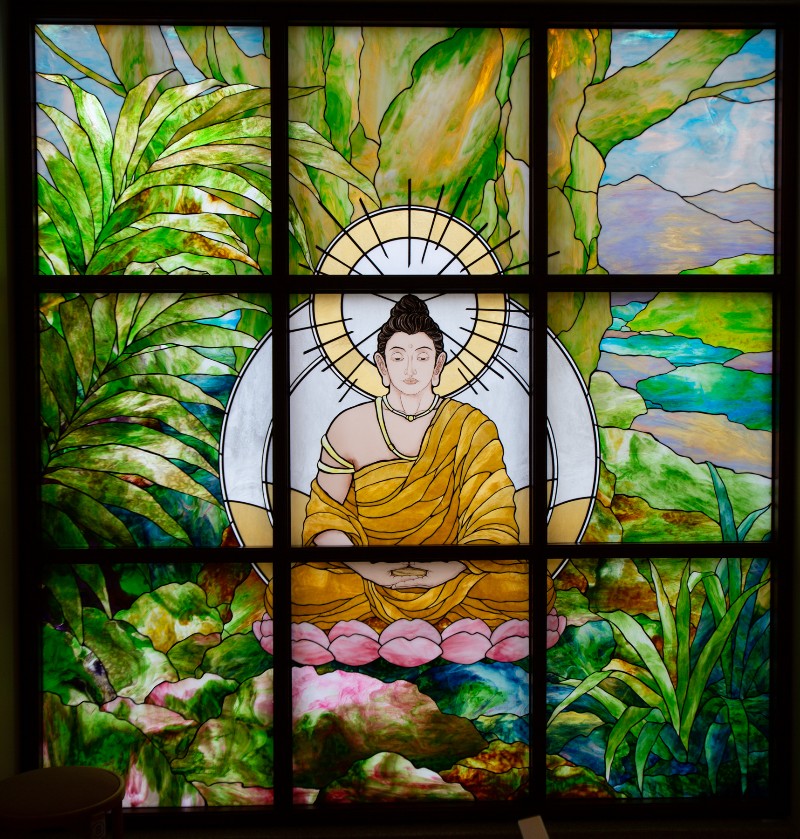 On the altar there are three Buddhas, one standing, one sitting and one lying, to represent his last teaching.

The large building houses a meditation room, an auditorium, numerous classrooms, cafeterias and an industrial kitchen. There are also dorms on the property, but at this point they are not in use by the temple as they do not comply with the code.

Shinnyo-en is an international Buddhist community founded on ancient wisdom and compassion from the teachings of Buddha Shakyamuni. Shinnyo-en is a secular Buddhist order based on the Nirvana Sutra (Mahaparinirvana), according to Ikehara. Considered the final teaching of Buddha, this set emphasizes that all people have the capacity to find their true selves and that by acting with compassion and concern for others, that authentic self will be found.

The way to happiness

Shinnyo Buddhism teaches that finding happiness depends on how individuals interact with people and the world around them. The term “shinnyo” combines spiritual awakening and the nature of reality. The “fr” refers to an open space or a garden without limits. Taken together, “shinnyo-en” becomes a place where people come together and bring out their inner Buddha or enlightened nature, according to Fan.

“We believe in three endeavors: community service, giving and sharing Dharma,” Fan said. “We attach great importance to what we can do to make the world a better place. “

The first Shinnyo-en-USA temple on the mainland was in 1982 in a small house on Jefferson Street in the Marina district of San Francisco, a house that the order still owns. Once the temple got too big for the house, Buddhist practitioners moved into what is now the Hoover School in Burlingame, until they also got too big for this site, O’Malley said. .

Today, Shinnyo-en USA has nearly 500 members who come from different counties including San Francisco, San Mateo and Santa Clara. There are weekend services, meditation sessions, and many pride and beautification activities planned. Food and toy drives and community service projects are planned for members to work together to improve the surrounding community, according to Fan. A youth association has nearly 100 members.

As is the case with many churches and other religious organizations, the Covid pandemic has negatively impacted membership in the order, but online services have helped, O’Malley said. During the pandemic, many services were held outdoors and a gravel area was set up under a tent so that the services could take place. Many rituals are broadcast from Japan. Services are translated into English, Japanese, Cantonese, Korean Mandarin.

The Higashi Hongan-ji Buddhist temple. From ktla.com Higashi Honganji, a Buddhist temple in Los Angeles’ Little Tokyo neighborhood, was vandalized on February 25. In security camera footage, an unidentified, apparently white, 30-something man can be seen jumping over the security fences in front of the temple before smashing two metal lanterns, putting fire at their […]

The pantry of Buddhist temples, a lifeline for Nepalese students

NEW YORK – Inside the temple in New York’s Queens borough, monks in maroon robes chanted and lit incense and candles on an altar in front of a golden Buddha statue. Earlier, on the sidewalk outside, people with face masks, shopping baskets and reusable bags stood in a socially distanced line stretching two blocks, waiting […]

At gofundme.com The Higashi Honganji Buddhist Temple in the Little Tokyo neighborhood of Los Angeles is rushing to rebuild and maintain a welcoming character following a vandalism incident on February 25. Following the attack, which damaged lanterns and a large window, the temple received an outpouring of support, with online fundraising reaching over US$90,000, more […]