Last weekend, I flew to the Midwest to attend two events in Toledo.

One was to join as a witness in Karen Do’on Weik’s denbo (full dharma transmission) ceremony.

The other was the groundbreaking ceremony for the new temple building for the Toledo Buddhist Temple on Saturday April 23, 2022. It was a wonderful event. Somewhere around two hundred people were present. There were even TV crews from two local news shows. It’s a big problem in this area. And, I believe, when I think of the state of Zen in North America, in the West in general, and in East Asia; I think that’s an important marker. 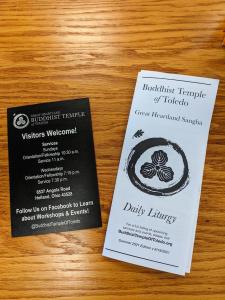 As we face the consequences of aging North American Zen, what I have variously called the great death or the great collapse (I notice others are now using these terms and I realize I should have dropped them ), many of us who have dedicated most of our lives to the Zen project, I wonder what is next.

When I visited this dedication in Toledo, I felt I saw one of the most exciting possibilities. 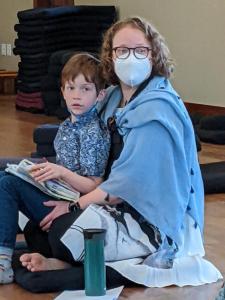 There are a few things to notice in the run-up to The Great Collapse. Zen as a recognizable thing here in North America dates back to the early decades of the 20th century, when Japanese missionary Reverend Hosen Isobe established temples in Honolulu, San Francisco, and Los Angeles. But it didn’t really hit the general population until the 1950s. From then on it took off and became a mainstream within our vast Western religious scene, and a prominent part of the counterculture that emerged in the 1960s and early 1970s. 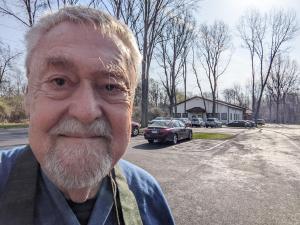 Teachers from Japan, Korea, Vietnam and China would all come to live in the West and present the unique forms of their cultural expressions of Zen Buddhism. People from North America and Europe were also going to Asia to train and come back as teachers. And soon people would be training in North America and becoming teachers. 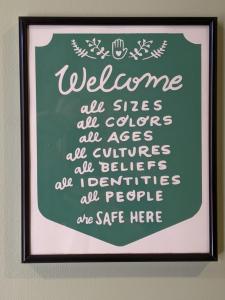 For various reasons, few of these teachers would be closely tied to the institutions of their Asian communities, and the North American Zen landscape would be left free to develop along the lines envisioned by their founding teachers. Or, at least as much, and perhaps in fact more commonly, depending on the vagaries of time and events. 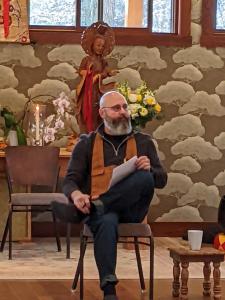 Today, there are temples with close ties to immigrant communities who attempt to promote religious cultural expressions from their homelands. They continue and among them there are very interesting developments. Among the converts, there are a few prominent lineage families, mostly descended from the work of early missionary teachers Shunryu Suzuki, Taizan Maezumi, and Seung Sahn. Between them, their dharma descendants claim most of the North American Zen scene, creating what I would call the normative forms of Zen in North America. Teach at least what most people consider Zen. 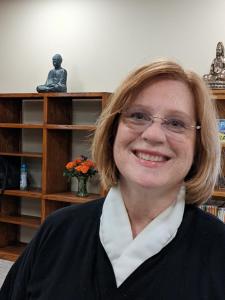 Beyond them, there are many other bloodlines. The most notable would be the one established by Thich Nhat Hanh. It is a Buddhist vision with a Zen component but more eclectic than what many here consider “Zen”, deeply shaped by the unique vision of this teacher. It tends to follow its own path. Among the other “smaller” lineages, there is considerable divergence in the focus of their teachings. Some are very exciting. Some are quite disturbing.

It is not a question here of establishing an exhaustive list of lineages in the West. But noting that the main communities were derived from the Japanese Soto, the reformed secular koan movement sometimes collectively called Harada Yasutani Zen, and the reformed vision of Korean Zen master Seung Sahn developed. For better and for worse. 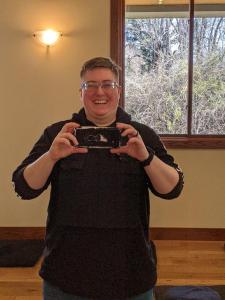 I am not a polemicist by nature. But I have read some of the rants about the state of Zen here on social media and often find in the issues outrage whose concern I share. An astonishing amount of Zen in the West seem concerned with zazen unrelated to the awakening project.

This mainly comes from the Japanese Soto bloodlines. At the same time, there is a kind of back-to-Japan movement among the lineages derived from Soto and Rinzai who believe that authenticity will only be found in a rigorous transmission of their specific lineage tradition with the least amount of effort. possible accommodations. 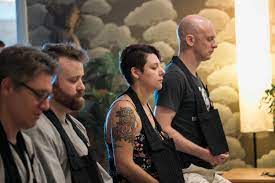 In my years as a participant observer, I feel that we are fully within this curse of “interesting times”. I also believe that the blessings travel quite closely with the curse of the interesting.

In my opinion, the main goal of the Zen project is enlightenment. I’m getting a little closer to the bone: Zen is awakening. I can’t say I’m not interested in Zen expressions that don’t emphasize this, my associations with Soto-derived communities are too long and too deep to repudiate the don’t worry about waking up, sit down just do the rituals, and with it an ancient romance with monastic life, without a word of appreciation. That the simple fact of sitting, the simple fact of doing the rites, can be, and sometimes is, an expression of awakening. But, as I see it, the gift of Zen is a path to awakening and integrating insight. Everything else is upaya. 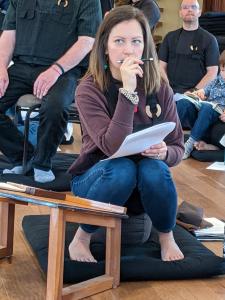 But what it must look like is not found, in my opinion, by going back to East Asia. With full gratitude, with many reverences, with respectful acceptance of essential gifts; we have to own this project. By “we” I mean the children of Turtle Island, North America and the West. With our mixed history, with our dynamic and dangerous moment in time. The we who arrived here and now.

Among the things that I consider necessary data for authentic Zen in the West is the assumption of the equality of people as full practitioners beyond categories of sex and gender expression. I find it necessary to seek housing for people who are largely not going to be monastics. 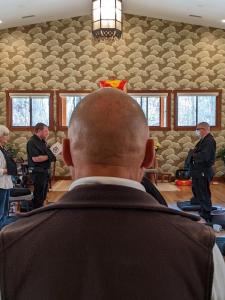 And I think it’s necessary for communities and their leaders to be aware of how people are included or excluded. In other words, I believe that Zen in the West, if we hope it succeeds, must find accommodations with the society in which we live. And, to be appropriately engaged. Appropriate is, of course, a confusing word.

The people I admire the most on the Zen path are largely focused on the awakening project. Most are not particularly interested in the social component and even disparage it on occasion as distracting. I respectfully suggest that they are missing several points. First, enlightenment is not separate from our lives. And that includes both personal life and social life.

Personally, I wonder about the value of the awakening that can only be found within a monastery. And, second, but intimately related, the transmission of tradition cannot be separated from the search for accommodations within the larger culture. This includes paying attention to the education of children. 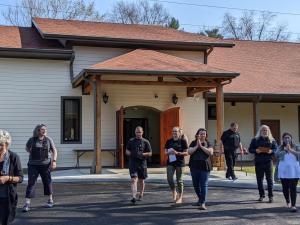 OK. All of this is the background.

I see a new vision emerging. I would say he sees quite clearly that for Zen to take root here, he has to pay attention to two things. Wake. Absolutely. Totally. Concentrate. And. Grow. These are all things that make us better people and better members of our communities.

A mature Zen practice should deal with awakening and growing. How they do it in Toledo offers a pretty good roadmap of what it might look like. They exist as two closely related projects, significantly overlapping, but also separate. 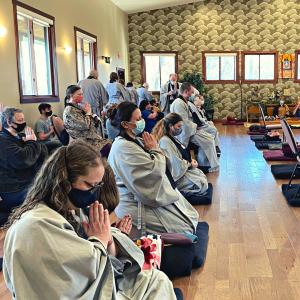 The first is what emerges as a pretty normative version of Zen practice, which instead of being monastic, is retreat-oriented. Lots of retreats of varying lengths, but rarely, if ever, exceeding seven days. These retreats are intensive and are intended to punctuate lives of regular daily practice. For Toledo, the thread that runs through them is what is often called the Harada Yasutani koan program, rooted in the Takujo Hakuin system, but adapted in a way that makes it only transferable in the West.

But this is not considered complete in itself. And, then there is the second aspect, what I called “the church”, and what they call the temple. It’s a place people come to, modeled not on East Asian temple life, but on Western religious patterns surrounding a Sunday service that includes educational opportunities for adults and children. Focus on children. 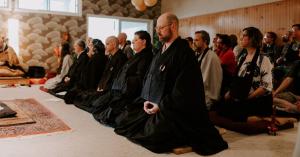 Children are welcome at the temple. Their noise and disturbances are seen as positive things and are accepted. Moreover, they are not ashamed of being Mahayana Buddhists. Some are Jews or Christians, many consider themselves non-religious. Their doors are open, and wide open. But the temple is a Buddhist temple. 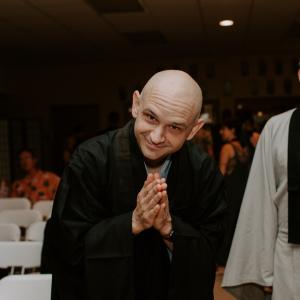 They offer a positive view of the world and are inclusive. And they are engaged. They are aware of social ills and, albeit reluctantly, hesitantly and thoughtfully, they take common positions on the issues of the day. Informed by their understanding of Zen Buddhism as a way to live in this world. They present as a whole people a lifetime.

Don’t overdo it. They are people. The lack of racial and ethnic diversity is seen as a wound and a deficiency. They are aware of class issues and know who can participate and who cannot. They see themselves as a work in progress. 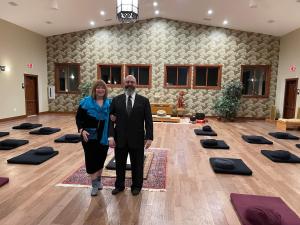 During the dedication of the temple, I noticed two particular things. Of the approximately two hundred people present, half were under forty years of age. And, it was a long service, and not the most kid-friendly event, but there were still at least half a dozen younger children in attendance.

Bottom line. Zen, it turns out, is alive and thriving in the American Midwest.

If you want to see what Zen will look like in the West in the coming decades, watch Toledo.

New Delhi [India], May 14 (ANI/PNN): Breathtaking divine architecture drew public attention along the route of the HSR, giving the divine feeling of entering a temple, and enriched with marvelous carvings and age-old art forms, especially Venkateshwara Swamy’s sacred idol at the showcase. It was obvious upon entering Mugdha that this was not just another […]

News Ria Chaitram 4 hours ago An open box of corned beed left by burglars at the Carapo Shiv Mandir. Photo courtesy of Hansraj Ramdhanie Burglars ransacked and desecrated a Hindu temple in Carapo, cooking corned beef in one of the pots used to make parsad, a traditional sweet made for religious ceremonies. Members of […]

To send a strong message to the self-proclaimed religious guardians of Hindu and Muslim communities who indulge in religious polarization, the Dharmarayaswamy Temple Committee and the Tawakkal Dargah Committee greeted each other and agreed to hold the annual karaga festival together. Dargah’s peers prayed for the temple priest Jnanendra and invited him to lead the […]