Weekend Walk is your guide to escaping the city using only your two feet.

While Yonghegong (Lama Temple) remains closed to the public, its less-visited but equally interesting neighbor, the Confucius Temple, remains open to visitors with advance reservations through their official WeChat account (search for kongmiaoheguozijianbowuguan)

Originally built in 1302, the Confucius Temple is one of the few major sites in Beijing that dates back to the era of Mongol rule and the Yuan Dynasty (1271-1368) and served as both an academy and important site for rituals venerating the Great Sage in the Ming and Qing periods. The complex is divided into two halves (both accessible with a single ticket). The eastern section is the real Confucius Temple. The courtyard to the west is the former location of the 国子监 Guozijian (Imperial Academy), where scholars sweated while studying in hopes of passing the final set of imperial examinations that might grant them a place in the bureaucracy of the emperor.

The entrance to the Temple of Confucius and the Imperial Academy is on Guozijian, a hutong that bears the Chinese name of the academy. Visitors who approach the front door from the east or west will encounter one of the “Dismantling Stones”. These steles, which date from the Qing era (1644-1912), remind in several languages ​​that visitors on horseback must continue on foot out of respect.

The first courtyard houses a much-photographed statue of the Great Sage. Confucius (the name comes from a Latinized version of his Chinese/hip-hop formal name 孔夫子 “Kong-Fu-Zi” or “Great Master Kong”) lived from 551 to 479 BC. consultant who, like many unemployed political consultants later, made his living through part-time gigs and adjunct teaching appointments.

He was popular with his students, and they recorded his words in a work known as 论语 Lunyu, often translated as “The Analects”. Confucius was just one of many traveling scholars, sages, philosophers, and advisers in a time of war and chaos, but his ideas and teachings became part of state orthodoxy during the Han dynasty ( more than two centuries after his death), and over time became an integral part of Chinese culture until, finally, Chow Yun-Fat played him in a movie. 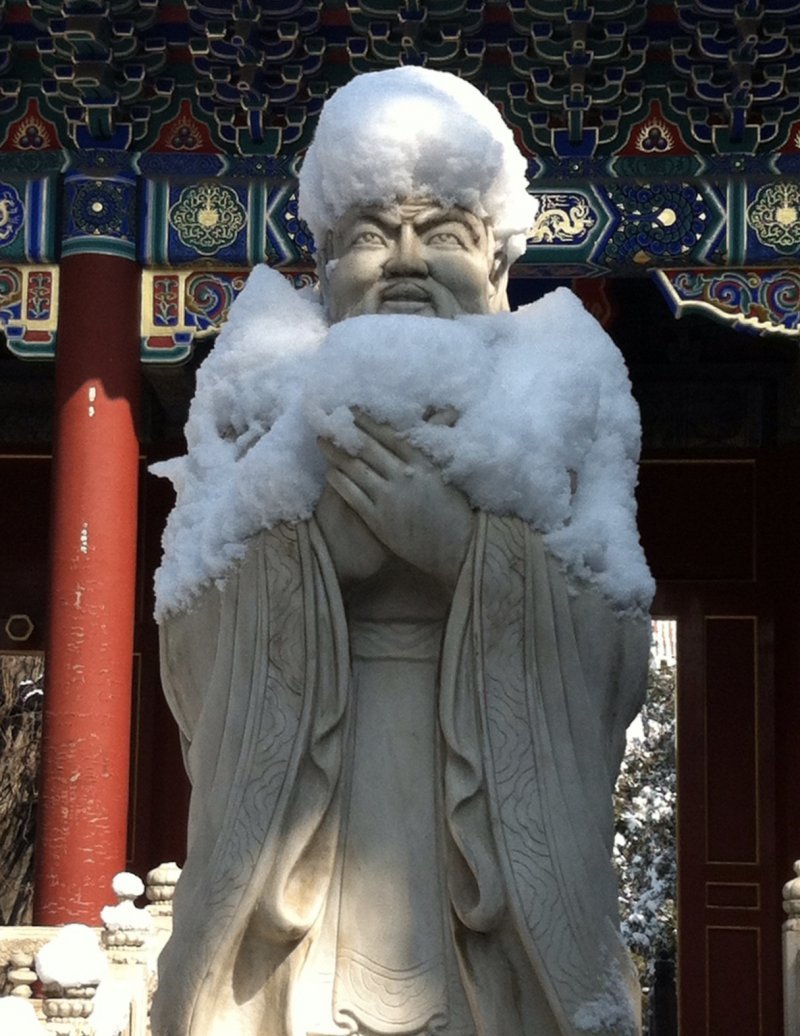 Arranged on either side of Confucius are tablets with the names of examination candidates from the Yuan, Ming, and Qing eras. Think of them as university yearbooks set in stone. If you happen to have a favorite Qing dynasty official (I’m personally a Zeng Guofan-stan), there are signs in Chinese to help you find their name. It’s like a less scary version of “Find a Grave”.

The gate behind Confucius is the Gate of Great Accomplishment, with a set of carved replica stone drums. These replaced a much older set which had graced the Confucian temples of earlier dynasties but which were later lost. 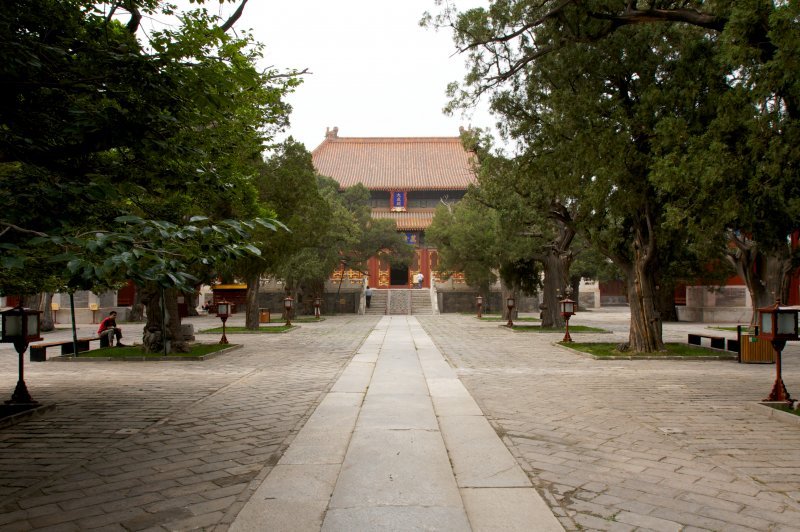 The central courtyard of the Confucius Temple is a great place to hang out. Ancient trees (including one that is the Chinese philosopher’s analogue of Harry Potter’s Whomping Willow) provide shade in the summer and are adorned with wisteria in the spring. The Hall of Great Accomplishments, the main structure of the temple complex, resembles an enlarged lineage hall, with ancestral tablets (in this case depicting Confucius, his disciples, and other great Confucian scholars). Above the sacrificial tools are placards with four-character platitudes of each of the Qing emperors. The one currently hanging in the center is not the work of an emperor but of Li Yuanhong (1864-1928), who was president of the Republic of China from 1916-1917 and then from 1922-1923.

Upon exiting the Hall of Great Accomplishment, go around to the left of the hall and find a door that leads to the back hallway (there’s also a restroom here, just in case). This hallway leads to the Imperial/Guozijian Academy via the Hall of the Stele.

This closed exhibition protects 189 stone stelae carved between 1726 and 1737 by order of Emperor Qianlong. On the surface of the stele are engraved the Thirteen Classics, which are part of the basic curriculum for scholars preparing to take the exams. 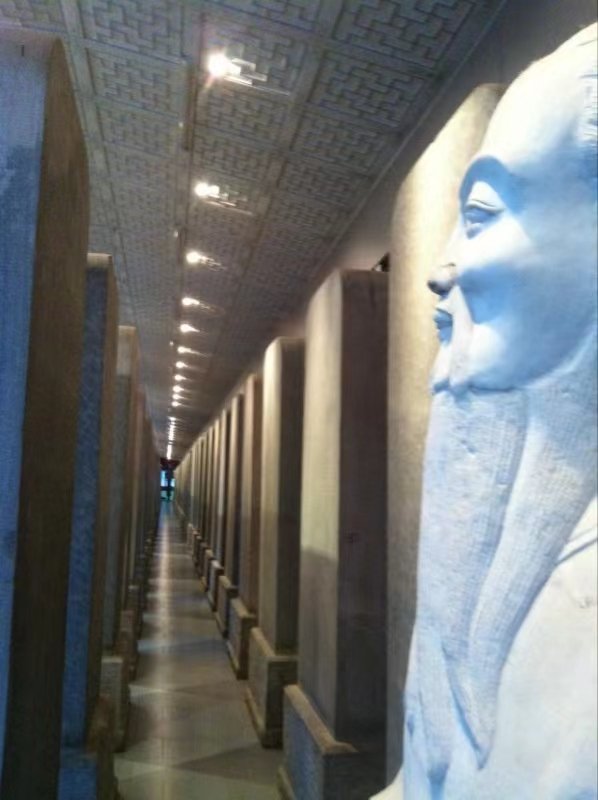 Several of the stelae show signs of damage. The Confucian Temple and Imperial Academy were frequent targets for the Red Guards during the Cultural Revolution and some particularly nasty “wrestling sessions” took place here. From the south end of the Stele Hall, turn right through the parking lot to the main gate of the Imperial Academy. 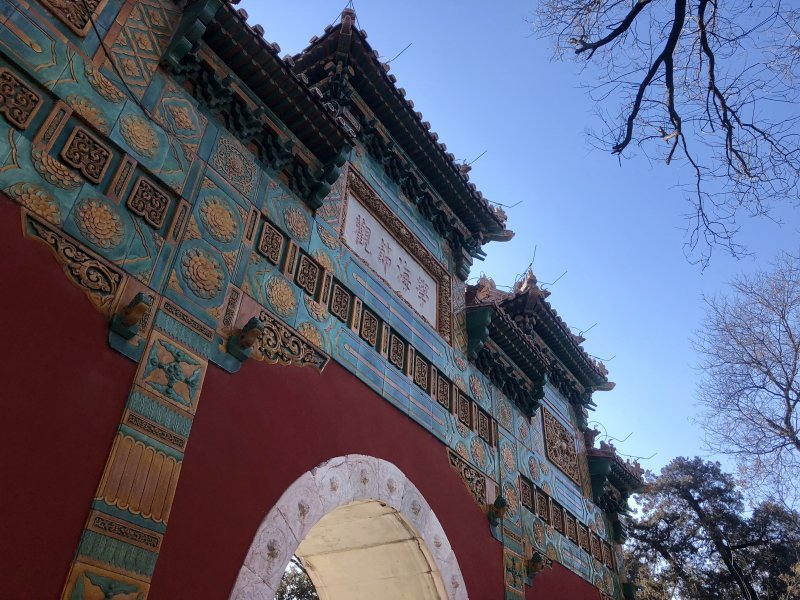 The restored glazed arch was first built in 1783 and bears inscriptions and exhortations to learn from the Qianlong Emperor with prolific content. The Qianlong Emperor is also responsible for ordering the construction of the Biyong Pavilion, a beautifully restored structure with a square foundation set in the middle of a round pool.

The Biyong Pavilion replaced the former Yilun Hall, located towards the back of the courtyard, as the main conference hall. Theoretically, emperors would come here at different times of the year to impart a bit of wisdom to the next generation of bureaucrats while shining their own intellectual pretensions. 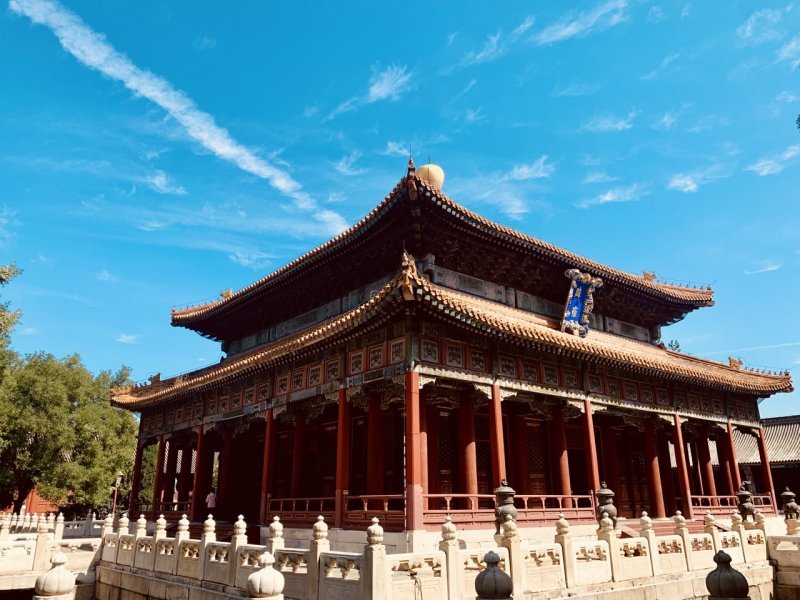 The pavilions on the sides of the courtyard once housed the collection of the Musée de la Capitale. The museum moved to Muxidi in 2006, and now the side halls display exhibits on academia and the examination system in Imperial China. Much of the material is in Chinese, although contemporary teachers may appreciate the exposition devoted to the various ways in which students managed to cheat on exams. Some things never change.

Before you go, maybe spend a little more time with the sage or bring something to read and sit in the shade of the trees and contemplate scholarly life in old Beijing. The Confucius Temple is not only one of Beijing’s oldest historical sites, but (on a good day) is one of the quietest places in the city center to soak up the vibe of old China .

Jeremiah Jenne earned his Ph.D. in Chinese History from the University of California, Davis, and has taught late and modern imperial China for over 15 years. He has lived in Beijing for nearly two decades and is the owner of Beijing on Foot, running history education programs and walking tours of the city, including deeper dives into the route and sites. described here.

Israel’s Supreme Court on Sunday ruled in favor of the Israeli government’s cable car project on the Temple Mount in Jerusalem. The decision was enthusiastically received by supporters such as Jerusalem Mayor Moshe Lion, who claimed the project would, “rreducing air pollution in the region, solving transport and parking problems, and providing comfortable and efficient […]

The Uttar Pradesh Anti-Terrorism Squad (ATS) invoked the strict Unlawful Activities Prevention Act (UAPA) against the accused Ahmad Murtaza Abbasi in the Gorakhnath temple attack case, it has been reported senior police officials on Saturday. Abbasi was taken into custody for 14 days after his custody ended on Saturday afternoon, they added. The UAPA allows […]

By Sanchali Basu HOUSTON: It was an auspicious and glorious warm summer day in Houston, the fourth largest city in the United States, when the groundbreaking ceremony for the Shiv Durga Krishna Kali Mandir (SDKKM) was held on the sacred ground, adjacent and east of 16628 Kieth Harrow Blvd home for the Sri Govindaji Gaudiya […]