Yakshagana followers say the act featuring the story of Bappa Beary has changed significantly over the years with recent versions caricaturing the Muslim legend.

The founding myth of the Bappanadu Durgaparameshwari temple is familiar to almost everyone in Bappanadu, a seaside village near Mulki in the Dakshina Kannada district of Karnataka. The story goes that the boat of a Muslim merchant Bappa Beary ran aground in the Shambhavi River in the 12th century, when he had a vision in which Goddess Durga asked him to build a shrine for her. The Jain rulers of the time provided the land and the place where this temple was built was renamed Bappanadu in honor of Bappa Beary.

For eight centuries, people of all faiths thronged the Bappanadu temple offering jasmine to the goddess and symbolizing communal harmony in coastal Karnataka or what locals call Tulunadu. This region encompassing Dakshina Kannada and Udupi districts on the Karnataka coast is where Tulu is mainly spoken. The annual Bappanadu fair is one of the most popular fairs in Tulunadu attended by thousands of devotees.

Except this year, Muslims, who were historically part of the fair, stayed away following threats from Hindutva groups who put up banners in Mulki warning of Muslim traders setting up stalls. Muslim traders who showed up at the fair were kicked out by members of Hindutva groups. Discrimination against Muslims in Bappanadu forms a pattern linked not only to contemporary events of communal tensions in this region, but also to the changing meaning of the Bappa Beary tradition.

The people of Tulunadu say that the founding myth of the Bappanadu temple became a family legend due to an act of Tulu Yakshagana ‘Bappanadu Kshetra Mahatme’. Yakshagana, a form of traditional theater that combines dance, music and dialogue, is popular throughout Tulunadu. Prasangas or acts of Yakshagana usually take place from dusk to dawn and take their themes from Hindu epics. “When you mention Bappa Beary, what comes to mind is the Yakshagana number I watched decades ago,” says Natesh Ullal, a filmmaker from Mangaluru who has been watching ‘Bappanadu Kshethra Mahatme’ for a long time. he is a child. The act has two main characters – Bappa and his apprentice Usman – and tells the story of the construction of the Bappanadu temple.

“I know the story of Bappa today through Sheni Gopalkrishna Bhat’s portrayal of the character,” says Natesh Ullal. The late Sheni Gopalkrishna Bhat, a dean of the Yakshagana art form, won acclaim for his portrayal of Bappa Beary in the 1970s and 1980s. “The character played by Sheni was very popular. He was humane and dignified in his way of speaking and conducting himself on stage,” Natesh recalls. However, Natesh and others who follow Yakshagana closely have noticed a marked change in the portrayal of Bappa Beary’s character in recent years. “Today, except in a few acts, this character is portrayed as a caricature with clownish behavior and jokes about his own culture,” says Natesh. It was first documented in the 18-part story about the saffronization of the Karnataka coast by journalist Greeshma Kuthar.

The filmmaker’s words are echoed by Kannada writer and literary critic Purushottama Bilimale, who also watched the act as a child and noticed how the presentation changed to exclude conversations in Bear and Malayalam languages. “In the past, this act of Yakshagana included Beary and Malayalam conversations with Tulu and Kannada. But now the use of Beary and Malayalam is limited and Bappa Beary’s character speaks Tulu and Kannada incorrectly to provide comic relief. It is a way of showing that he does not know how to speak the languages ​​spoken by the masses in this region,” says Bilimale.

“But that wasn’t the case before. (Sheni’s) character quoted Kannada poets and at the same time had bear dialogues which he learned to deliver by conversing with his Muslim neighbors,” says Purushottama Bilimale. Her character would say both ‘Ya Allah’ and ‘Amma’ (Goddess Durga) in the same tone giving equal respect. He would say that our problems need to be solved and for that, any God will do,” he says. “But if you watch recent versions of this act, you don’t come away with the same feeling,” he adds.

The Yakshagana law reaffirms the centuries-old cultural bond that Bappanadu Temple shares with the Muslim community. “Muslims are part of temple events like the Brahmakalasha. They come in groups and make offerings of rice and jasmine flowers to the goddess,” says Dugganna Sawant, head of the Bappanadu temple committee and a descendant of the Jain rulers who provided the land for the temple. “Muslims are also part of the jeernodhara or renovation committee. Here, the harmony has endured,” says Dugganna Sawant. A ratha bomb or doll cart at the temple which is taken in procession on festive nights has a Muslim figure, an ode to Bappa Beary.

“The custom of offering prasada to descendants of the Bappa Beary family was also followed at the annual fair this year,” says Sawant. But the recipient of the offering – Ahmed Bashir Beary – did not attend the annual fair unlike in previous years. Many Muslim residents of Mulki and surrounding areas said they missed the March 24 event because they were hurt not only by the actions of Hindutva groups, but also by the lack of support from the temple committee and local civic authorities to call and stop the illegal acts of Hindutva groups. 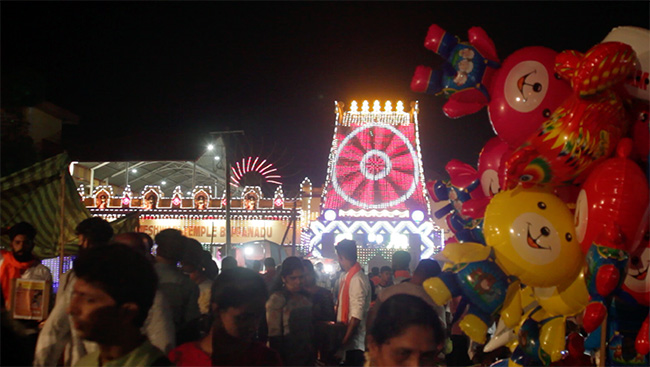 Members of Hindutva groups have also made questionable claims to tell Bappa Beary’s story amid communal tensions over the past month. A WhatsApp attacker widely shared by Bajrang Dal members claims that “Bappa Beary is Boppanna who converted to Islam before building the temple”. A temple committee member, speaking on condition of anonymity, said the developments are concerning. “We are saddened by it. Muslims not only played a role in the construction of this temple, but there was a connection that continued for centuries. But the banners were placed outside the temple premises and there was nothing we could do about it,” the committee member explained. “We want to make it clear that we did not intend to ban Muslim traders. We hope that this situation will be resolved by the (state) government in the future,” says the member of the committee.

Kolhapur: The traditional “khete” at Jyotiba temple – known as “Dakshin Kashi” – located in Wadi-Ratnagiri started on Sunday with a strong turnout from devotees. Some people climbed the hill from the ‘gai mukh’ area, while many preferred to walk directly from the Shivaji Bridge over the Panchaganga River and from Japhale, the villages of […]

Prime Minister Narendra Modi and his Nepali counterpart Sher Bahadur Deuba will conduct a comprehensive review of recent agreements as the two meet in Lumbini in the neighboring country on the occasion of Buddha Purnima on Monday, sources said. On the agenda for the one-day visit are memorandums of understanding (MoUs) in sectors related to […]